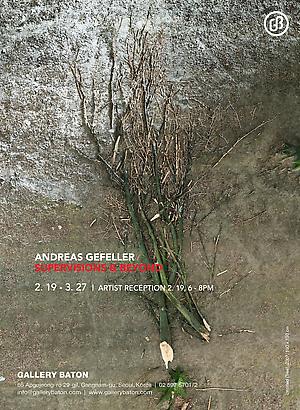 Gallery Baton presents “Supervisions & Beyond”, the first solo exhibition in Asia of German photographer Andreas Gefeller (b. 1970) from February 19th to March 27th at the Apgujung exhibition space.

This exhibition presents leading works from the artist’s major series, “Supervisions” and “The Japan Series”. Both these series release in a visually interesting way how the structures that are familiar to us like parks, buildings and man-made urban spaces transform when the artist’s own interpretation and creative approach are intervened; therefore, it will provide an opportunity for the local art lovers to experience a new wave of contemporary photography and dwell upon the topic that each work brings.

“Supervisions” series creates the photographic effect of not having restrictions in the air even for the photos of man-made structures and interiors of the buildings. In fact, in order to derive this way of result, the artist’s unique sophisticated process and correction work should inevitably be colligated with each other. Through this process, according to the author’s way of expression, the photographs that seem to be taken while “flying in the air” are born. For the results like this, the artist takes numerous photographs at the height of about three meters and extracts exactly one final image per one square meter. He then performs a series of steps by utilizing digital technique to exquisitely interconnect these images. Although the photographs are taken from the maximum height of three meters, the actual results seem to be taken from the space that is significantly apart from the ground. This production is not unrelated to the artist’s childhood history of being absorbed into astronomy.

The images of natural environment and man-made structures that seem to be close up shots by satellites approach to us quite differently from the familiar ones that we see normally within the physical constraints laid onto the humans. Through this series, The artist also wanted to show how the natural environment, which has existed for a long history, has become a means of assisting humans due to the rapid industrialization, increase of population, and emergence of city. The trees that are planted by exactly one square meter, the garden and lawn existing for the purpose of landscaping between the buildings, etc. exist in a way that goes against the original meaning of “nature,” thus making his ideas agreeable.

His works also clearly show how the space that we live in is focused on the maximization of human’s convenience (including visual satisfaction) as the photographs of office or lecture hall are collectively known as buildings. The devices installed in the buildings by default and the way they are located and interconnected are sufficient to give visual basis for suggesting that it could be similar to the way how living organisms are connected to each other for supply and circulation of nutrition.

“The Japan Series” began when the artist traveled to Japan several times and found interest in the structures that have special characteristics of Japan that cannot be easily observed in Europe, such as telephone poles and their accessories. As opposed to the previously explained series “Supervisions”, “The Japan Series” was photographed by looking up the telephone poles. Through meticulously set composition, the artist shoots two images that are juxtaposed against each other based on the telephone pole and erases this pole during the process of post-digitization; therefore, the end result creates a scene with various accessories and electrical lines installed in the air.

While looking at each image, the reason why the artist is drawn to telephone poles, the seemingly mundane urban structures, in Japan can be realized. The electric wires are evenly stretched with strict direction and follow certain rules, and they lie in the black and white background by being installed with calculated intervals. This image reveals minimalistic element of how paradoxically the functionality has become the primary consideration for any object. At the same time, it naturally leads us to ponder about the functioning behavior of a society, Japan, which lies within our notion.

In particular, the telephone poles that stretch out in an orderly manner from the transformer and various communication devices that are mainly located in the exact center make us to recall living organisms’ nerve or blood vessel that spread into neighboring space by self-propagation. While the artist showed how the structures in the human-dominated cities and their natural environments have been transformed to become optimized in “Supervisions” series, he takes one step further in “The Japan Series” by showing that these structures ultimately mimic the behavior and appearance of living organisms.

Born in 1970, the Düsseldorf-based Andreas Gefeller studied photography at University of Essen. He began to establish international recognition through his first series “Soma” which started in 2002 and “Supervisions” series. He recently had group exhibitions, “Out of Focus” at Saatchi Gallery in 2012 and