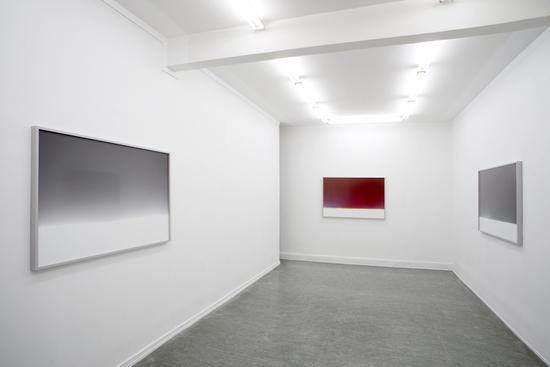 Julian Faulhaber's exhibition Corona will be exhibited at L.A. Galerie from January 31st through March 28, 2015

Corona, Julian Faulhaber’s new photographic series made in Cairo, was inspired by the large illuminated advertising panels throning high above the city’s traffic arteries. These billboards dominate their environment not only through sheer size, but also through their glaring colors, which provide a stark contrast to the smog and desert dust engulfing the city.

The radiant reign of the gleaming advertising signs reminds one of a crown and at the same time of one of Bruno Taut’s urban visions: In 1919, the expressionist architect and urban planner developed the concept of a garden city, in the center of which a crystal tower rose high above and clearly visible from afar. Taut called this crystalline structure the Stadtkrone, or city crown, which was not meant to serve any function, but “just be beautiful.” In his concept development, Taut let himself be inspired by cities and monuments of different epochs and cultures. Besides Athens with the Acropolis and Bangkok with the Wat Arun Temple, Taut referred to a picture of Cairo, “Mother of all Cities,” in which two majestic pyramids rise behind a city packed full with houses and mosques.

Faulhaber’s perception of Cairo was initially shaped by the many housing blocks and hotels obstructing the view of the ancient cultural monuments; with sprawling, chaotic development, the city has long crept onto the feet of the pyramids. While they still leave a powerful impression, the tombs have ceased to be the crown of the city. Faulhaber instead confers the title of city crown to the billboards, or even more so to the light they radiate at night.

Faulhaber transforms this association, the image, into the picture. He photographed at night, when the neon lights bring out the advertising panels especially brightly and clearly and the reverberation of the light transforms the colors.

The resulting pictures show neither the products nor the setting of the advertisements. Even the surroundings remain hidden from the viewer, there is no cityscape in the background. After all, it is not the documentary, the materiality or the narrative of the situation which intrigues Faulhaber, but its poetic abstraction: the light discoloring the dark sky, the illuminated space developing a life of its own in the dark. The pictures are immaterial and entirely abstract. A fuzzy contour divides large, dark color areas from smaller, overexposed ones. The wide spectrum of colors is impressive and in daylight could not be found anywhere in Cairo. The saturated dark colors with a ‘vintage’ touch are reminiscent of Mark Rothko’s late works.

Faulhaber’s Corona series is distinguished by a formal elegance which derives from its particular coloration, but especially from reduction: There is no narrative, no staging. The viewer will look in vain for a commentary on “aesthetic ‘consumerism,’ which usually completes the cycle of merchandise, words and numbers,” as Jacques Rancière wrote in The Politics of Aesthetics. Instead, Faulhaber concentrates on the constellation of image and picture, a constellation of what is seen and what is thought. As a result, Corona is not mere representation, but a request to think a new picture.