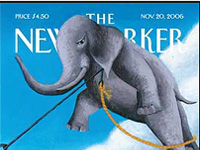 This new gallery opens with an ambitious and savvy show of more than fifty pictures by the nine established photojournalists who make up the four-year-old agency of the same name. Some of the work (James Nachtwey’s closeup of a man in Rwanda with four slash wounds across his face, Ron Haviv’s shot of a Serbian militiaman kicking a fallen woman in the head) is already quite famous, but much of it is unfamiliar and strikingly wide-ranging. Antonin Kratochvil’s horrifying image of a murdered man in Haiti, his head skinned raw, would seem to have little in common with the poetic allusiveness of Joachim Ladefoged’s pictures from Albania except a deep understanding of the art of reportorial engagement.