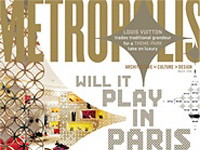 Photographers Lynne Cohen and Michael Wolf have unique talents for documenting details of the built environment that the rest of us normally miss. A combined show at New York's Hasted Hunt Gallery highlights both artists' knack for capturing unexpected aspects of the places we live and work. Cohen focuses her lens on interiors, tracking down institutional settings that present an unintended eeriness, and making banal rooms seem almost surreal. Wolf, on the other hand, shoots outside and finds surprising geometric patterns, and a sense of claustrophobia, among the skyscrapers of Hong Kong.

"I came with the baggage of art in general more than the baggage of photography," says Cohen, who was originally trained as a sculptor. "That includes the baggage from the readymade, and thinking that, in fact, the world seemed completely readymade, and ready to be reframed." Over the years, she has photographed everything from office buildings and spas to laboratories and military installations. She delights in finding rooms where the contents seem out of scale, and in underlining the nitty-gritty details that can give designers nightmares. "Architects seem especially sensitive to things that I'm interested in, including heating vents, electrical outlets, duct tape, wires, molding, and all those details that make up a space that people often want to camouflage," she says. "I'm very drawn to the ways in which architectural spaces and details give you the wrong information. I'm fascinated by the way in which everything is really the wrong size--the cues always seem wrong to me."

If Cohen's work is about the little details, then Wolf's is about what happens when you take one giant step back. In his series Architecture of Density, he illustrates the incredible mass of Hong Kong through tightly framed photos of towers that seem to have no top or bottom. "The crucial element in my pictures is that there's no horizon and no sky because I like this idea of endlessness," says Wolf. "You have no idea if the buildings are a hundred floors, or five hundred floors, or a thousand floors." And one of the magical things that happens when you lose this context is that patterns begin to emerge. "The pictures almost appear like supermarket bar codes," he says. "You have this extreme element of abstraction. If you look at them from three meters away, they look like geometric patterns. And then when you go up close you can see the name of the producer of the underwear hanging in the window."

While there is plenty of evidence of human activity in both Cohen and Wolf's work, neither of them include people in their photos, leaving the buildings to speak for themselves. According to Cohen, there's also another benefit to this approach: "If you empty spaces of the people who live there, you get a sort of hallucinogenic heightened awareness of what could happen. It adds a sense of theatre."