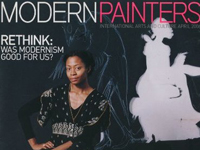 While the trappings of a mid-century America are certainly present in Erwin Olaf's photographs- orange kitchen counters, wood-framed blackboards and mattresses so thin that they are uncomfortable to look at - the photographer's models betray their con temporariness.  The cheerleaders in The Gym [2004]  are slim even by today's standards, and the boxers in The Boxing School [2005] a little excessively gym- buffed.  Other details, too, recall the commercial sector in which Olaf's work is well-known.  In The Boxing School,  the shorts could be from a Y3 or Prada spread, and in The Classroom [2005],  the v-neck's fashionably high armholes and trim cut earmarks it as a retro- hip rather than retrospective proper.

But  atmosphere, not accuracy, is the point here, and Olaf excels at evocative images.  His photographs are striking not so much because they seamlessly and seemingly effortlessly conflate commercial photography and high art [ an exhausted debate in any case], or even because they successfully deploy tricks from product photography to add visual interest [most notably in the play scale in works like The Kitchen, 2005].  They are striking for their open- endedness.  Consider The Boardroom [2004], where the relationship between older boss and younger secretary is palpable, if ambiguous, and The Hallway [2005], in which details- the flowers in the woman's hand, an umbrella-  add up to an inconclusive narrative.  it is as if the protagonists of these scenes, thrown together by the photographer and linked by assorted props, are unsure about their roles.

Some strategies Olaf uses to overcome the limitations of the photographic print depicting door left ajar [The Bedroom, 2004] and having two people face outward, like the graphic novelist's convention of showing shot and reaction shot in the same frame [Hairdresser, 2004 and The Dancing School, 2005].  The first accords greater spatial dimension and the second provides a sense of temporal distention.  Finally, there is the motif of a stormy night, glimpsed through windows, that appears in almost all the photographs.  At first, seemingly, an awkward moment in an otherwise masterful displace of digital manipulation [it is obviously Photoshopped], this persistent, inconsistent, thematic cliché functions, in the final analysis, as an easy entry point for the viewer to step into a world that, if not quite accurately mid-century America, is certainly not our own.