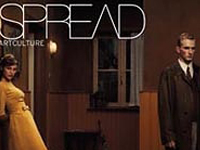 Erwin Olaf describes the images he has made for his newest series, Rain and Hope, in personal terms: "It's the moment between action and reaction, something said and before you can answer, like when your boyfriend or girlfriend breaks up with you." But Olaf's poignant, pregnant pauses are also allegorical depictions of the photographer's broader social concerns; they are "...a translation of where democratic society is at the moment." His bereft souls, unable to communicate, lost for words, represent the difficulty he feels as an artist articulating his feelings about his post 9-11 world. "I have to make something reflecting how I think and how I worry," he says.

But Olaf's mission isn't to make agitprop; "I'm not a political photographer," he says.  "But this is not eye candy, it's an intensely personal moment.  Should I be more aggressive and angry? Maybe, but I wouldn't have something like that on my wall.  It's tiring."