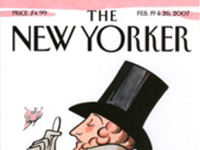 Goude’s trademark mix of the exotic and the erotic, of the raunchy and the kitschy, is definitely over the top, but it’s also so meticulously polished that its transgressions (nearly all of which involve cartoonish racial stereotyping) never seem rude. This quick survey of editorial, advertising, and album-cover work from the mid-seventies to the present rounds up some of Goude’s most memorable images, including several of the performer Grace Jones, whose sleek, androgynous persona was largely his creation. Long before Photoshop, Goude was a master of the seamlessly staged tableau (see his Times Square chorus line), and he’s only become more accomplished (see the photo-finish shot of models in couture gowns). Through Feb. 17. (Hasted Hunt, 529 W. 20th St. 212-627-0006.)