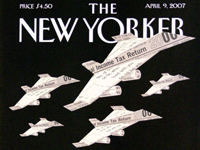 This Dusseldorf-based photographer's U.S debut is full of huge aerial images (some almost nine feet wide) that appear entirely abstract from across the room.

But on closer inspection a green field is grass dotted with thousands of white golf balls, and a brown one is a hive of yellow feeding stations surrounded by fuzzy baby chicks. Gefeller shoots from slightly above the ground and digitally cobbles together his final images from hundreds of smaller photos. The best of the bunch aren't merely clever feats; they suggest a combination of alien surveillance and instant anthropological dig. What does the debris left behind at a Hong Kong racetrack reveal about modern civilization?