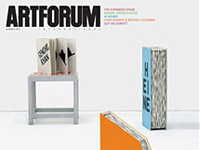 The pristine environments in "Lowdensitypolyethylene," German photographer Julian Faulhaber's solo debut in the US, are captivating on multiple levels. Faulhaber has a flair for the dramatic, and transforms images of banal--albeit strikingly colored--urban and other environments into psychologically portentous compositions. The artist photographs his subjects--nightclubs, loading docks, shopping complexes, sports arenas, apartments--at their moment of completion. They are Edenic, as yet unsullied by human touch, but poised for first use. Faulhaber infuses each image with an eerie hermeticism derived from the settings' absolute newness, a refined sensitivity to abstraction and seriality, and an absence, for the most part, of natural light.

The womblike enclosure in Lounge, 2006 (an updated, blinged-out version of Jeannie's bottle), is upholstered floor to ceiling in green vinyl, features a flat-screen monitor, and is bathed in lemon-lime light. The entrance to the space is vaguely cruciform, and not so vaguely vaginal. One senses that it is about to be overrun by the outre individuals who people the work of Jeremy Kost and Nan Goldin, which makes the pre-orgy purity all the more amusing.

The newness of Hinterausgang (Rear Exit), 2007, a nighttime view of a gray brick rear exit, has the look of a model or a diorama; determining its scale is difficult. The simple geometry of the composition directs the viewer's attention to the mildly hypnotic brick patterns on the walls, sidewalk, and driveway. But this is also the sort of place one associates with violent late-night encounters, and a blue and orange striped bollard suggests the column upon which Christ is said to have been scourged (a famous relic in Rome's Santa Prassede). But Faulhaber's work isn't uniformly ominous. Several of his large prints celebrate simple forms in supersaturated colors: an orange, cantilevered staircase in Aufgang (Entrance), 2007, the stacks of sumptuous red chairs in Stuhle (Stacking Chairs), 2007, and the pegboard-style, perforated baby-blue ceiling of Decke (Ceiling), 2007. These works are efficient, formally elegant, and evince a sharp editorial eye.