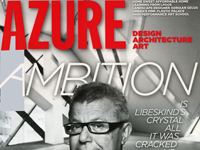 Andreas Gefeller likes to fly - as long as he can keep both feet planted on the ground. By taking thousands of photographs of a specific site and digitally stitching the images together, the Dusseldorf-based photographer creates unique bird's-eye views of the land. Gefeller discovered his technique almost by accident. "I was sitting outside on the grass, and I had my camera with me," he explains. "I started taking photos of the ground, and later, when I put them together, I started flying. I could see the scenery from above." • His abstract style follows in the footsteps of a number of photographers who have trained their lenses on the built environment since the latter half of the 20th century. Through tight framing, the flattening of three-dimensional objects, and even manipulating images through manual or digital means, they show the world in a different context . For his ongoing Supervisions series. which began in 2002, Gefeller mounts a camera to a tripod he holds out diagonally from his waist in order to capture images of the ground in front of his feet. He then walks the chosen site a metre at a time, row by row, snapping photographs every step of the way. The finished works include up to 2,500 individual images, and when mounted on a wall one image fills the viewer's visual field, creating that odd floating sensation, which the artist calls "flying." Gefeller allows his audience to play God, with perspectives that appear as though taken straight through the roof of a building, above a highway overpass, or staring down at chickens in a coop from the sky. He shows us the world we've built for ourselves by finding beauty where we didn't think it existed . If you look closely at each image, sometimes you can find seams where Gefeller has joined individual images. The imperfections are reminders that these images. while created by documenting reality, are filled with the delicate flaws of human construction. Andreas Gefeller is represented by the Hasted Hunt Gallery, New York