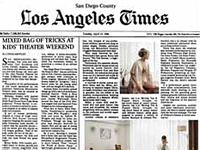 Dutch photographer Erwin Olaf describes "Grief," his recent series, as an exercise in "the choreography of emotion." You could also call it a study in beige, which would seem almost oxymoronic -- is there any color less emotive than beige? Given the delicacy with which Olaf achieves it, however, this muted quality is key to the work's surprising poignancy.

Each photograph depicts a single figure in an elegant Modernist interior, suspended in melancholic reverie. The characters, meant to evoke Kennedy-era aristocracy, include a young man named Troy and several exquisitely poised women with tailored dresses, sculptural hairdos and names such as Irene, Victoria, Sarah, Caroline and Grace.

There's no explicit narrative, but the tone is bleak. The figures sit alone at tables set for two; they lean blankly against doorjambs and stand at windows clutching handkerchiefs, gazing through translucent curtains.

The mise-en-scène is flawless: nothing out of place, not a blemish or scratch, not a single anomalous or superfluous object. The lines are clean and meticulously composed, with an emphasis on the vertical, particularly in the curtains, so as to suggest the atmosphere of a prison.

But for the modest peach of Sarah's floral-print dress and the pumpkin hue of Caroline's blouse, the tones rarely stray from the cream-to-mahogany spectrum. The air is oppressively still.

For all this artifice, one would expect the work to feel cold or contrived, but it doesn't. The effect is similar to that of a Douglas Sirk film: stylized but not hollow, the artifice crystallizing the emotion rather than replacing it. The characters are abstractions, but the sentiments they embody -- loss, entrapment, repression -- are palpable and distinct.

Olaf's past work, while similarly meticulous, hasn't been nearly so reserved. Leering clowns with dripping makeup, naked models with designer shopping bags over their heads, elderly women in pinup poses, ice queens with rasps plunged into their hearts, and a good many rope-bound breasts and penises -- this is Sirk via Robert Mapplethorpe and David LaChapelle, which may explain why the beige feels not quite so dull: Olaf grasps the nature of the more dangerous colors -- the more violent emotions -- but this beige is cultivated to smother the human chaos these neat lines attempt to contain.

In one of the show's most compelling images, Troy kneels in a living room, the back of his hand raised to his nose as if wiping away tears. The image stands out because it is the only near slip: the only flicker not of emotion -- there are a few other tears -- but of physical awkwardness. The women, one gathers, would never so betray themselves. In this world, they are the keepers of order. It is a role Olaf seems to both admire and pity.