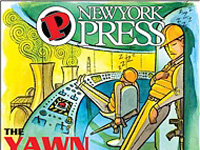 Two recent gallery-opening excursions through Chelsea revealed a landscape beyond the rivers of cheap wine and rolling hills of salty finger food. Three specific photography exhibitions formed a commentary on the ways man-made spaces can be more-or-less (generally less) hospitable to human beings.

At the Hasted Hunt Gallery, the artist Lynne Cohen greeted friends and admirers of her photographs with a warm smile, and the usual postcard-sized exhibition flyer was replaced by complimentary exhibition posters for all. Her small format pictures in black and white show modern interiors that would be very awkward to live in and even oppressive to look at, had they not been altered by human interaction. In her pictures, minimalist living rooms are made inhabitable with the addition of ugly recliners and TVs, cold and isolating offices show the comforting wear and tear of their usage, and gaudy decorations undermine the uncomfortable sparseness of hallways and lobbies. Cohen’s pictures (on display until December 22) suggest a great sense of humor: she revels in the tastelessness of these modifications, just as she acknowledges their necessity.