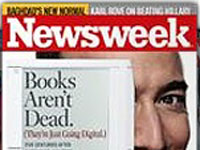 How is that even remotely possible? The medium certainly looks alive, well and, if anything, overpopulated. There are hordes of photographers out there, working with back-to-basics pinhole cameras and pixeled images measured in gigabytes, with street photography taken by cell phones and massive photo "shoots" whose crews, complexity and expense resemble those of movie sets. Step into almost any serious art gallery in Chelsea, Santa Monica or Mayfair and you're likely to be greeted with breathtaking large-format color photographs, such as ANDREAS GEFELLER's overhead views of parking lots digitally montaged from thousands of individual shots or Didier Massard's completely "fabricated photographs" of phantasmagoric landscapes. And the establishment's seal of approval for photography has been renewed in two current museum exhibitions. In "Depth of Field"— the first installation in the new contemporary-photography galleries at the Metropolitan Museum of Art in New York, on display through March 23—the fare includes Thomas Struth's hyperdetailed chromogenic print of the interior of San Zaccaria in Venice and Adam Fuss's exposure of a piece of photo paper floating in water to a simultaneous splash and strobe.

At the National Gallery of Art in Washington, "The Art of the American Snapshot, 1888–1978" (up through Dec. 31) celebrates average Americans who wielded their Brownies and Instamatics to stunning effect.

Yet wandering the galleries of these two shows, you can't help but wonder if the entire medium hasn't fractured itself beyond all recognition. Sculpture did the same thing a while back, so that now "sculpture" can indicate a hole in the ground as readily as a bronze statue. Digitalization has made much of art photography's vast variety possible. But it's also a major reason that, 25 years after the technology exploded what photography could do and be, the medium seems to have lost its soul. Film photography's artistic cachet was always that no matter how much darkroom fiddling someone added to a photograph, the picture was, at its core, a record of something real that occurred in front of the camera. A digital photograph, on the other hand, can be a Photoshop fairy tale, containing only a tiny trace of a small fragment of reality. By now, we've witnessed all the magical morphing and seen all the clever tricks that have turned so many photographers—formerly bearers of truth—into conjurers of fiction. It's hard to say "gee whiz" anymore.

Art and truth used to be fast friends. Until the beginning of modernism, the most admired quality in Western art was mimesis—objects in painting and sculpture closely resembling things in real life. William Henry Fox Talbot, who produced the first photographic prints from a negative in 1839, immediately saw the mimetic new medium as an art form. Talbot wanted only to be able to "draw" more accurately than by hand. In fact, he called his first book of reproduced photographs "The Pencil of Nature." For at least a century thereafter, any photograph with a claim to being art had in its DNA at least a few chromosomes from Talbot's "The Open Door" (1844), a picture of a tree-branch broom leaning just-so-esthetically against a dark doorway. Of course, great photographers have never merely recorded visual facts indiscriminately, like a court stenographer taking down testimony. They've selected their subjects carefully and framed their views of them precisely, in order to give their pictures the look of "art." Later in the 19th century, "pictorialist" photographers used soft focus, toothy paper, sepia tones, multiple negatives and even scratching back into the image as ways of getting photographs to look more like paintings.

Soon, photography escaped the exclusive grasp of the professionals and moneyed hobbyists who could afford its cumbersome equipment, and the public began to take its own pictures. In the 1920s, small, inexpensive fast-shutter cameras like the Kodak Brownie appeared. By 1950, according to Kodak, nearly three quarters of American families owned cameras and took 2 billion photographs with them. By the 1970s, they were taking 9 billion pictures a year, most of them quick, informal snapshots. To be sure, some masterpieces did emerge—mostly accidentally—from this Everest-size heap of images. The person who pointed his Brownie at the woman in "Unknown [photographer], 1950s" in "The Art of the American Snapshot" probably didn't anticipate that she'd cover her face with her hands just as he clicked the shutter. And he (or she) couldn't predict that the result would be a great composition—long fingers and angular elbows set against the gentle downhill sweep of a field—and a wonderful metaphor for photography's tango with the truth. What the inadvertently great snapshot shared with the work of realist artist-photographers like Dorothea Lange and Walker Evans in the 1930s and '40s, and Diane Arbus and Robert Frank in the 1950s and '60s, was that the people in them were who they looked like they were—raw-boned farmers, gritty miners, harried housewives, burly bikers—really doing what they looked like they were doing.

In the late 1970s, however, the concept of fiction in photography reared its little postmodern head. "The big change in attitude from realist photography," says Lawrence Miller, who owns a prominent photography gallery in New York, "was when Metro Pictures [one of the hippest galleries in SoHo] showed Cindy Sherman in 1980." Sherman's fictional self-portraits—fake "film stills" with the artist posed as a negligeed blonde on a bed, or a dark-haired femme fatale in a chic apartment—weren't photography's first turn away from the straight, nonfiction reportage most people think of as great photography. But her pictures represented something new in the way that photography was considered as art. It wasn't just for reportage anymore. The Talbotian esthetic door was now fully opened for photographers to make photographs just as well as to take them. The advent of digital technology only exacerbated photography's flight into fable.

We live in a culture dominated by pixels, increasingly unmoored from corpor-eal reality. Movies are stuffed with CGI and, in such "performance animation" films as "Beowulf," overwhelmed by them. Some big pop-music hits are so cyberized the singer might as well be telling you to press 1 if you know your party's exten-sion. Even sculpture has adopted digital "rapid prototyping" technology that allows whatever a programmer can imagine to be translated into 3-D objects in plastic. Why should photography be any different? Why shouldn't it give in to the digital temptation to make every landscape shot look like the most absolutely beautiful scenery in the whole history of the universe, or turn every urban view into a high-rise fantasy?

Photography is finally escaping any dependence on what is in front of a lens, but it comes at the price of its special claim on a viewer's attention as "evidence" rooted in reality. As gallery material, photographs are now essentially no different from paintings concocted entirely from an artist's imagination, except that they lack painting's manual touch and surface variation. As the great modern photographer Lisette Model once said, "Photography is the easiest art, which perhaps makes it the hardest." She had no idea how easy exotic effects would get, and just how hard that would make it to capture beauty and truth in the same photograph. The next great photographers—if there are to be any—will have to find a way to reclaim photography's special link to reality. And they'll have to do it in a brand-new way.