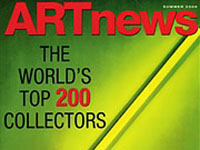 When photographer James Mollison launched the Website doyoulooklikebritneyspears.com in 2004, he was living in Los Angeles among what seemed to be countless young women who looked and dressed just like the pop star. He wanted to know if the resemblance was intentional, but when the site didn't get many hits, it occurred to him that a concert might be a better place to find these celebrity look-alikes.  Britney Spears wasn't touring at the time, so instead Mollison hung around outside a Marilyn Manson show to see if the Goth rocker had a similar effect on his fans.  The tribe-like groups he found there and at other concerts became the basis of "the Disciples," a show of seven photographs on view at HASTED HUNT Gallery in New York through August 16.  (A book of images from all 59 concerts will be published by Chris Boot this fall.) For the photographs, fans who were dressed like their heroes posed individually in front of a white backdrop, and the images were digitally combined into long rows.  Seven middle-aged Rod Stewarts with feathery blond hair give smoldering looks to the camera and seven scowling Bob Dylans--an "academic, intelligent" bunch says Mollison--wear dark coats, scarves, and the occasional broad hat.  More surprising to the photographer, though, were the Manson fans.  Despite their aggressive eye makeup, tight black leather, and penchant for loud heavy-metal music, Mollison says, the fans were "very sweet, quite quiet, and shy."  Their outfits he, he says, were "kind of a mask."