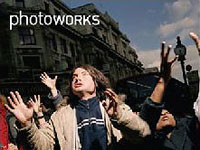 Lynne Cohen takes photographs of spaces and interiors.  She frequently finds her subjects in places that are hidden from public view: in research facilities, medical laboratories, military and police schools, highly specialized factories, or in classrooms at universities and schools.  Everyday objects appear alien, puzzling, or threatening.  A cot standing in a room with smooth white walls and cold lighting, a side table with medical equipment and an IV bag lose their purpose as medical aids.  Associations can arise: one is reminded on inhuman experiments or questionable autopsies.
A chair in a sparsely-furnished room with a concrete floor and a partition screen calls o mind an interrogation situation.  In her photographs, Lynne Cohen works time and again with ambivalence and associations and leaves the viewer in the dark about the actual functions of the spaces and equipment.  She formulates a subtle critique of society by enabling ostensibly harmless situations to be interpreted as something abysmal and complex.  However, Cohen also takes photographs of the bizarre and comical, the questionable taste of furniture and accessories.  She encounters these renditions with a tremendous sense of humour and reveals the formal qualities of these everyday ready-mades.
Lynne Cohen has been taking photographs for more than thirty-five years, during which she has built up and extensive oeuvre.  The Canadian counts among the most important representatives of conceptual documentary photography.  Her work has influenced or flanked a whole row of other photographic works.  In 1977 the American artists Mike Mandel and Larry Sultan published their book Evidence, which was reprinted in 2003.  The volume includes a collection of found black and white photographs from the archives of insurance companies, police and fire departments, hospitals and laboratories.  The images show places and occurrences that we do not normally get to see, such as crime scenes and reconstructions of accidents.  Tests and explosions of all kinds and condense there photographs into a pandemonium of the administered and engineered world.  Lynne Cohen’s work also includes similar forms and modi operandi of absurd, abstruse, dangerous indeed occasionally even perverted inquiring mind, much like the unpretentious depiction of social violence that comes to light in The Omega Suites (1991-98) by Lucinda Devlin, a series of American execution chambers, death cells and gas chambers. Devlin documents an archaic and morally highly contradictory procedure in a formally rigorous series and opens t up for discussion without comment.  Lynne Cohen also proceeds with the same precision and rigour, except that she throws light on all areas of society.  Thus she can also be regarded as the forerunner of Taryn Simon.  In An American Index of the Hidden and Unfamiliar (2007), Simon shows places and people in American society that are far from comforting.  In addition to research facilities in which marginal areas of science are explored and commented on, Simon also makes portraits of people, and in an interplay of text and image, she succeeds in making their monstrous ideologies manifest.  She shows that, paradoxically, the icons of American freedom are based on violence and exclusion on hate and fanaticism.
Lynne Cohen’s work also poses the question: how far can freedom go before it is twisted into its antithesis?  When you look at Cohen’s photographs you feel that you are witnessing processes and events that are uncontrollable and threatening, and that democracy and the social premises of a peaceful coexistence can only be maintained with a great deal of effort.
The title that subsumes Lynne Cohen’s works between 1971 and 2005 – Camouflage – can be taken as an analytical commentary: it means concealment, and in this context it can also be understood as (self-) deception.  Something is there but one does not see it; one is not supposed to see it or does not want to.  This ability to make something hidden or forgotten visible by documenting it is a fundamental quality of photography.  At the same time, however, photographs only show a section and condense their message on the film of reality.  Thus the title of Lynne Cohen’s current series – Clear Arrangements (2007) – can be interpreted in either an ambivalent or ironic way.  The clarity in these images is deceptive: in this case, clear arrangements are anything but simple certainties.