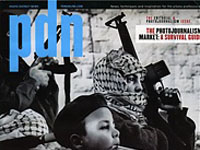 PHOTOJOURNALISM IN THE FINE ART SPACE

Increasingly, photojournalists are eyeing the gallery world as a source of income.  Hasted Hunt opened in 2005 with an exhibition of photographs by VII Photo photographers, but the gallery’s co-owners, WM Hunt and Sarah Hasted, first ventured into selling photojournalism as art in 2003 when, while working at Ricco/Maresca Gallery, they mounted a controversial exhibition of photographs by Luc Delahaye, including large-format prints of his 1994 “Dead Taliban” priced at $15,000.
There has been resistance to taking documentary photos out of context and placing them on gallery walls.  Says Hunt, “Photojournalists in particular seemed offended that one of their own was getting $15,000 prices.  One of the hardest things is trying to educate people who work in reportage how my world works.  The market for this is really in its infancy.  They don’t understand how to promote it.  They’re even at odds with it.”
Hunt says the market on photojournalistic print is very small, perhaps a few dozen passionate collectors.
“It’s very hard to sell, very hard to develop an enthusiasm for,” he says.  “Yes, it’s a hard sell.  Nobody has a monopoly on it.  Eighty percent of our colleagues are terrified of it.”
Bonni Benrubi, who exhibited Paolo Pellegrin’s photographs at her New York gallery in June and July at prices ranging from $1,800 to $18,000, concurs that photojournalism is a hard sell in the art market.
“We know we’re not going to make money on this work, but it’s important to show what’s happening,” says Benrubi.  “My epiphany with Paolo about photojournalism is that people don’t want to look at photojournalism of today.  But Paolo is a genius and whether his work sells isn’t important.  His pictures are important and need to be seen.”