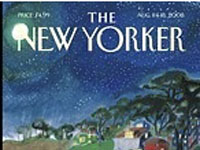 
The exhibition combines two series of photographs: closeup head shots of apes and friezelike lineups of concert-going fans. Mollison’s humans are so devoted to their chosen performer (Bob Dylan, Rod Stewart, Jimmy Buffett, Marilyn Manson) that they could be their stunt doubles; some groups suggest freakish tribes, others just look like comic clones. Perhaps because they stare out at the viewer with such intensely direct gazes, Mollison’s chimps, gorillas, orangutans, and other primates are far more compelling and sympathetic. The comparison is unfair, of course, but, then, so is evolution. Through Aug. 16. (Hasted Hunt, 529 W. 20th St. 212-627-0006.)