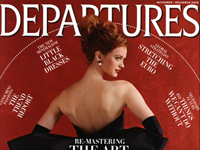 A lot of attention has been focused on Thomas Demand, Oliver Boberg, and James Casebere, artists who make photos of architectural models so pristine that the results look like images of real spaces. Julian Faulhaber, a 33-year-old German photographer, turns this approach on its head. His pictures of new buildings are so pristine that they appear disconcertingly unreal.

Shooting with a four-by-five camera and using only available light, Faulhaber makes prints up to five feet across without digital manipulation. His 2004 image Lounge captures the clausterphobic green interior of a podlike clubroom straight out of a sci-fi movie. In Sports Hall, from 2005, a gym’s pink floor becomes a canvas, crisscrossed with paterns of lines, boxes, and circles. These settings, freshly built and devoid of people, are too good to be true. With Faulhaber’s eye for color and composition, they become vivid modern abstractions.

Based in Dortmund, Germany, Faulhaber shows with Hasted Hunt in New York, where his recent work is on view from October 30th through December 13. Even before the show opened, the Metropolitan Museum of Art acquired one of the images, which are produced in two sizes, in editions of seven, and priced from $5,000 to $8,000. “These works,” says gallery co-owner William Hunt, “glow like alien objects.”