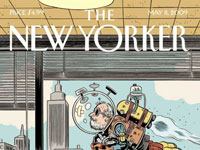 Goings On About Town: Art

For his first New York exhibition, "Flesh Rainbow," Bark shows large-scale photographs of male nudes, female nudes, and still-lifes, in triptychs that include one of each. But don't expect a polite, academic exercise. Bark's figures are bizarre- outrageous and fetishistic, sometimes more comic than erotic, often both at once. One ample woman is veiled to the waist in tendrils of her own dark hair; a lithe young man has had a large bowl of spaghetti overturned on his head; another one wears a black bucket. Their faces obscured and their bodies tinted by sunlight falling through colored gels, Bark's models might be creatures of artifice, but they're also far more naked than nude and unlike anything you've seen before. Through May 23.