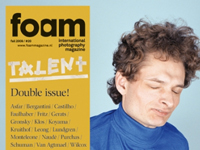 F: Can you tell me a little bit about the motivation, the ideas behind your work?

JF: I was working for years on the sets of different advertisement shootings, where I developed a sense of ‘constructed’ processes, and later I tried to transform this into my own environment. Just like in the case of advertising, the spaces I photograph have the aim of satisfying human needs. At the poignant moment of perfection between their completion by the contractors and the arrival of the first users, that aim seems to be at the highest level.

F: So what are those needs then? After all, all these places look very artificial and clinical.

JF: They are artificial and clinical, especially in this pristine condition. The curator Lyle Rexer recently wrote that the world in my pictures is one of intense desire, but desire antiseptically satisfied; mannequin desire, corporate architecture’s version of the zipless fuck. I agree with that.

F: Some of your work reminded me a little bit of Thomas Demand’s images, even though your approach and his couldn’t be any different. In both cases, there is a large amount of shiny artificiality in the images – and both works seem to stress the way reality is constructed. Do you see similarities?

JF: Most of my pictures aren’t digitally processed. So the digital affect is not a result of the manipulation on the computer, it is created by the colours, by the material ad the light setting. The colours are intense, the material is polished, and the light – in combination with the film – amplifies these aspects. Demand’s pictures are made of paper; and in combination with the use of light the material creates this artificial and obscure feeling, even though the pictures are beautiful. Maybe this is a similarity between our pictures.

F: But both are constructed realities, aren’t they? Even though your photographs are taken in places that actually exist, in the photographs they feel as real or unreal as the ‘places; in Demand’s work.

JF: That’s right. Demand’s fabrication of cardboard interiors is creating fictional spaces, but they are based on actual settings and I’m going the other way around. The places that actually exist are looking like they were generated by a computer.

F: Why are there no people in the photographs?

JF: People would detract from the surface of things and the surroundings. If you would see people on the pictures, you wouldn’t have a doubt about the existence of this place and further of its usability.

F: How do you place your work in the context of German photography? Who are your influences, what has served as your inspiration?

JF: When I started studying photography, I was a big fan of Andreas Gursky, Thomas Demand, Thomas Struth, but also of Wolfgang Tillmans. But I wouldn’t say that German photographers exerted a stronger influence on me than Americans like Lewis Baltz , Robert Adams or Jeff Wall. I am not really sure about the context, with this series Lowdensitypolyethylene I’m putting myself into the context of the German architectural, large-scale photography, but the next series could be something completely different. The technique depends on the idea, and this is the problem with putting my work into one category.