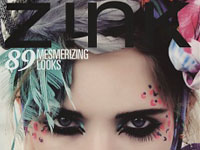 Worth A Thousand Words: We Delve Into The Indelible Images Of Photographer

Neither lost nor misplaced in time or place, Jeff Bark's subjects are nonetheless not in control. Animate or otherwise, they exist in a highly personalized realm where Bark presides from above, where the garments are traded for gags off camera and where the set is sparse but buoyant. Monstrous and macabre, his images evoke an emotional response after the fashion of all great art in any medium. Through Bark's varied portraiture and still-life compositions, the viewer comes to know an artist adept in his medium, possessing a poignant understanding of humanity. Unmasked entirely and stripped of identity and reason, his charges are divested in the most profound way only then to be recast in a tableau sometimes rich, sometimes dour and sometimes mad, but always transcendent.

In his latest show, "Flesh Rainbow," presented at the Nicholas Metivier Gallery in Toronto during the Contact International Photography Festival, Bark tied together several years of studious exploration into the dramatics of human flesh as a vessel for expression. What makes the nudes of "Flesh Rainbow" so compelling is Bark's skill in speaking directly to the human condition using the language of the body exclusively. It's the form that expresses the panoply of the human experience. It's the meat and the bone. It's the gristle. And without a doubt, only upon his meticulously crafted sets could these shapes, poses and postures elicit the emotional response they do. No eyes to tell us they are crying. No mouths to tell us they are mad. Bags, rags, plastic and pillows mask these figures' heads. They cannot speak the language we have known from birth. Only their posture, props and environment can inform the viewer of their state of mind: only Bark's handling of his actors and sets can give us insight into the plight or delight of this human clay.

But this describes only half the work. However indelible that set of images, a series of still lifes accompanies it with equal or greater power- a thread that has run through his work over the last several years. Starting with his breakthrough "Abandon" at Michael Hoppen Contemporary in London in 2006, Bark demonstrated an austere respect for the classic approach to still life composition; his work then sometimes mimicking the studies that every serious painter would have had to engage in from the 16th century straight through the 20th. Bright florals and phallic fruits offset by a hairbrush, ribbon or haunting but playful pig mask, these stills foreshadowed by brilliant sculptures that Bark assembled and shot for his most recent show. Drawing together common objects in uncommon arrangements, the photographer has even created a portrait of humanity within these assemblages. A bunch of grapes, a lampshade or sometimes a birdcage will act as a head while the fishbowl, blanket or chair becomes a body. These forms integrate their disparate parts into a whole that dogs and inspires as easily as his obscured and intense anatomies.

It has been a rapid ascent for Bark. Quickly capturing the attention of the world's editorial brigade he has, for good reason, garnered a fair amount of press in a short time; each of his three shows outdoing the last both in their bravery and wit. From "Abandon" to "Woodpecker" to "Flesh Rainbow," Bark has challenged himself anew each time, stretching his palette and testing his audience's assiduity. Only to be expected, if one knows the pedigree. The Duluth, Minnesota native studied at the Brooks Institute for Photography in Santa Barbara before embarking upon a successful string of engagements with some of the world's best-known publications and brands for imagery. He shot for Vogue. He shot for Sports Illustrated. He shot for Victoria's Secret. We should immediately understand his adept handling of the erotic, the indecent and the raw. Twenty years of life inside that industry gave him the faculty to deal with the bestial, the brutish and the carnal outside of it. Through this corporate format and function shone the passion and precision of a true artist. A transformation finally complete: one through which it now need not be glamour, celebrity or ego on display. now pasty unknowns, mushy and bent, greet the lens.

To create the deep resonance of his prints, Bark uses a large format camera with long exposure offsetting the detail of the scenes with a startling softness. His latest works also demonstrate a retouching of the chroma to further his exploration. New to the "Flesh Rainbow" series, this step is another in what has been a continuous climb both technically and viscerally over the last four years. The emotional impact of each image is elaborated upon by the washed hues evocative of the mood they inhabit.

So the solitary suburban mother takes a call. And spaghetti dresses the standing nude in the kitchen. Another sits with stifling pillows secured by a cord around her head yet not suffocating - merely waiting, poised for the next act. These individuals people the scenes the artist builds and so they inform his vision. But what of the still lifes? What of the sculpture? Under what duress is that lamp? Why so many cigarettes? And why is that plaster unicorn so content? Surely in the coming years we will learn more about the vibrant lives Bark's abstracts inhabit. Certainly his coming works will further illuminate their urgent message. His imaginings and discipline will no doubt bring more fruit to the fore.