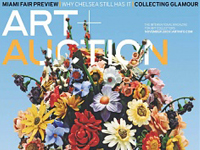 ...BUT EVERYONE LOVES CHELSEA

"No sooner had Charles Cowles retired than HASTED HUNT KRAEUTLER jumped at the chance to snap his storefront space on the 24th Street power block."

The Upper East Side has its charms, 57th Street has its history, and the Lower East Side has the cool factor...but everybody loves Chelsea.  Sarah Douglas finds out why.

The recession may have derailed the best-laid business plans and seemingly solid projections of many New York galleries, but not all the news is bad. Although a number of spaces have closed, a host of dealers are following the advice of White House Chief of Staff Rahm Emanuel not to let "a serious crisis go to waste" and using this moment to relocate and restructure.

Some, like the gallerist Amy Smith-Steward, are going the "pop-up shop" route to avoid long term financial commitments. When Smith-Stewart's lease was up this past May, she decided to close her two-year-old Lower East Side gallery on Stanton Street and become a nomad, producing "less static, more elastic and hopefully more artist-driven" shows in temporary spaces. Last month she inaugurated her series of roving projects with a group show at Kumukumu Gallery, on nearby Rivington Street.

Other dealers are taking the opposite tack, digging in and trying to solidify their businesses. Exhibit A is meagadealer Larry Gagosian. He seems to be thumbing his nose at anyone who'd think a measly global economic downturn could get him to shutter any portion of his ever-growing empire by launching a storefront shop for Gagosian-published catalogues and limited-edition art objects just a few steps from his branch on pricey Madison Avenue. That on the heels of opening an eighth gallery, in Athens, with plans for a ninth, in Paris. The gallery-world realignment may be most visible in West Chelsea. Not long ago, it seemed as though the neighborhood would fall into the hands of luxury-condo developers. But with construction stalled all over the city and commercial leases finding few takers, dealers are moving into street level spaces that were previously out of their reach. In October storefronts in Chelsea that had once rented for as much as $120 per square foot were going for $65 to $75 per square foot; some spaces above 29th Street and west of 10th Avenue could be had for as little as $30. Art world veterans will recall a similar phenomenon in SoHo during the recessionof the early 1990s, when a number of dealers, including Brent Sikkema and Blum Helman, took advantage of the slack rental market to nab better locations. Since landlords still have to pay taxes on empty properties, they are structuring deals to get galleries in fast and allowing some to take leases as short as a year, instead of the typical five years or more.

Vacancies plus lower rents have led to a gallery version of musical chairs: When a dealer closes in a prime storefront, another, often from an upstairs location or less ideal neighborhood, quickly snaps it up. in the case of West Chelsea, once ground zero for the blue-chip and the cutting-edge, the influx of staid galleries is resulting in what the New York Times art critic Roberta Smith has lamented as "the squaring" of the neighborhood.

Back in July, on the very day Bellwether announced it was closing, a number of other galleries submitted proposals to lease its choice storefront on 10th Avenue and 18th Street, according to real estate agent Anne-Brigitte Sirois. The winner was Andrew Edlin, who has moved his contemporary-and-outsider-art gallery into the space from its former nook on the sixth floor of 529 West 20th Street. Next door to Bellwether, the space formerly occupied by the Cohan and Leslie gallery is being taken over by the American modernism dealer Lori Bookstein, who is relocating from a smaller 57th Street location, where rent was doubling. "A lot of galleries are looking [at West Chelsea] because they are aware that there are opportunities," says Bookstein's director, Lauren Bakoian. "We got in at a good time."

Another midtown gallery that has decamped is Ameringer McEnery Yohe. The 15-year 57th Street veteran seized ground-floor space on West 22nd Street made available when the longtime tenant, 303 Gallery, decided to consolidate its operations in a new, larger 21st Street space, also at street level. "I had to make a decision on the spot, because many other people were interested," says Will Ameringer, who adds that he had been waiting for a vacancy on particularly desirable blocks in the neighborhood for more than two years. "There is no critical mass of galleries on 57th Street anymore. If you want to be viable, you need to be amongst your colleagues, and the artists and critics."

The increased visibility and foot traffic that come with having ground-floor space have always been important to dealers, and the current economic climate, which has made buyers charier, has also made a street presence more crucial than ever-even if it means paying a little higher rent. Margaret Thatcher broke her lease on the fourth floor of 511 West 25th Street to nab the 23rd Street storefront left empty by Caren Golden Fine Art, which closed in July. According to Thatcher, her peers with ground-level spaces were drawing some 300 visitors on Saturdays while she was getting only about 20.

"Now that we are beginning to compete with galleries that are more established than we are, we need to play the game and have the right kind of space." says Lea Freid, the co-owner of Lombard-Freid Projects, which is moving from an upper floor on 26th Street to the ground floor of the Annabelle Selldorf designed building that will be completed next spring on 19th street- the block whose north side is dominated by David Zwirner’s sprawling flagship and whose south side will next spring sport yet another Zwirner space, in architect Shigeru Ban’s brand-new Metal Shutter Houses building. “We even felt off the grid on 26th Street,” Freid adds, “because until a few years ago, people weren’t going that far north. You want to make it easy for collectors. The days of getting attention through the grapevine are over.”

One neighborhood that would seem primed to benefit from this push to the ground floor is the Lower East Side, whose old tenement architecture provides a plethora of storefronts. Here, however, is a case where size matters. “We looked on the Lower East Side but in the end couldn’t even consider it.” Says Freid. “The Lower East Side isn’t really feasible if you want a space larger than, say, 1,500 square feet.”

Despite the LES’s lively art scene, many dealers are sticking toor gravitating toward Chelsea, because of its more-generous, spaces, not to mention its more navigable street grid and its (still!) 300-plus galleries, both factors that make many collectors more at ease. “I wanted to figure out if Chelsea offers something the Lower East Side doesn’t,” says Sean Horton, the owner and director of Sunday, a gallery for emerging artists on Eldridge Street on the LES. Last spring he opened a second space, Horton & Co., on West 22nd Street, in the former digs of Taxter&Spengemann, which moved to the East Village in March. Horton soon found himself bringing artworks from Sunday to Chelsea for clients who were more comfortable there and didn’t want to break up their gallery rounds with a trip to another neighborhood. In September he brought on Frank Liu, a collector and advertising art director, as partner and renamed the business Horton & Liu. The Eldridge Street location is now a project space for artists Horton doesn’t represent. “Collectors like Chelsea better,” he says. “Critics like the Lower East Side. Artists want both.”

Still, for dealers who haven’t been swept up in the market frenzy and are looking for a community of peers, the Lower East Side, anchored by the New Museum on the Bowery and home to around 35 galleries, Blackston (formerly Bespoke), from West 27th street. Where she’d been for five years, to Ludlow Street. She was attracted by the opportunity to rent storefront space and, just as crucially, by the “independent spirit” of the LES’s art community and its conceptual aesthetic. The gallery has reoriented its program toward artists with a similar bent, such as Tina Hejtmanek, whose nearly abstract landscape photographs composed its inaugural show, in September. As for being off the beaten track, Kubicka notes, “We’ve always been under the radar of the larger art market anyhow.”

Which is not to say that the LES lacks highly commercial ventures. Lehmann Maupin, of Chelsea, and the uptown gallery Salon 94 both maintain second spaces there, and the area just missed adding a branch of Hauser & Wirth: Before the economic downturn, the gallery was negotiating to buy a building on the LES, but when the crisis hit, it decided instead to renovate an Upper East Side town house it already owned. Next spring, the Sperone Westwater gallery will move from the Meatpacking District to the Bowery. It settled on the location two years ago, says Angela Westwater, explaining, “We wanted to create an innovative space for our artists.”

The gallery will occupy an entire Sir Norman Foster-designed structure, on which construction has just begun and which will feature glass walls and a room that can move between floors like an elevator. Westwater is banking on the Bowery becoming a showcase for cutting-edge architecture, stretching from Thom Mayne’s stylish new Cooper Union building to the stacked silver hatboxes of SANAA’S New Museum, right across the street from the gallery’s new space. However, this transformation may now take a little longer than originally expected. “When we decided to do this, I never thought that we would be the economicstimulus plan for Lower Manhattan,” Westwater remarks wryly.

New York galleries, meanwhile, are working on their own economic stimulus, accomplished by following not a plan but a principle: “Whether changing their approach to business or relocating their still all-important physical space, they, like sharks, must keep moving or die.