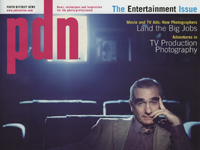 Paolo Ventura's ability to create realistic imagery by photographing miniature tableaux hinges on his obsession with detail and the viewer's desire to believe.

Italian-artist Paolo Ventura began building and photographing miniature tableaux in his Brooklyn studio out of simple necessity. He envisioned scenes that he wanted to photograph, but he was unable to find or create them outdoors. So he constructed them by hand, erecting miniature buildings and sidewalks, sewing together clothing for the inches-tall figures that populate his scenes as stand-ins for actual people.
Ventura then takes Polaroids of the scenes, experimenting with lighting—he has used household lamps in the past, but primarily uses available light—and perspective until he finds a mixture that turns his scale models into photographs that can look extraordinarily real.
In his new body of work, “Winter Stories,” Ventura imagines how an elderly circus performer might remember his life during the moments before he passes away. The work explores the way people create the story of their own lives through the details they recall.
In October of this year, Aperture released a book of the new series, and this month New York gallery Hasted Hunt Kraeutler is exhibiting the work. Ventura has also shown “Winter Stories” in galleries in The Hague, Moscow, Verona and Milan.
After working as a fashion photographer for ten years, Ventura moved to the United States to begin a new chapter in his life. He introduced himself to the art world in 2006 with “War Souvenir,” his first major project, a series of tableaux based on his grandmother’s stories about the last two years of World War II in Northern Italy. A book of the work was released by Italian publisher Contrasto, and Ventura showed his photographs internationally in several solo and group exhibitions.
While “War Souvenir” depicts a specific place and time in history, “Winter Stories” is an “invented past,” which Ventura created whole cloth. In his story of the old performer, Ventura considered what people remember of their lives just before death. “I like the idea that in the last minutes before you die you see a film of your life,” Ventura says. “We change things, we adjust things. We try to cancel certain things.”
In the short text that opens the book, Ventura writes that as his performer looks back on life, he remembers “not moments of great drama, but rather, fleetingly recalled glimpses of an everyday life: images that he had thought to have never seen….” Ventura says his own memory works in a similar way. “I remember details from things that have no importance,” he says.
Scenes from what Ventura describes as a “poor circus in a vague past”—a lion tamer, fire eater, sword swallower, clown, photographer—combine with recollections from the performer’s off hours in the small towns the circus passes through.
Ventura’s ability to create photographs in which viewers can glimpse reality from miniature sets depends on the meticulous rendering of select details rather than painstaking construction of entire scenes. “If you see my sets [in my studio], they’re not really well made, they’re enough [to make the photographs convincing],” Ventura says.
Elements like wool gloves, newspapers, fallen leaves scattered in the street, or umbrellas wet with rain not only create a sense of time and place, but when combined with lighting and focus techniques, convince the eye to believe what it sees. “I am really obsessed with the detail, [because] that changes the perception. Realist paintings, if you see them from a certain distance, they look real. It’s kind of the same thing.”
Ventura compares his work to that of a film director or a fiction writer rather than a photographer, and believes his photographs appeal to many viewers because he deals with major themes like loneliness, love and dreams. His images also contain tiny details that only a few people recognize. For instance, the costumes on Ventura’s clowns reference the work of Italian painter Antonio Donghi, one of Ventura’s favorite artists.
While he strives to create images that look real, he says the success of his work also depends on the audience’s desire to believe. “[The photographs] touch the same core of people [as films],” he says. “People want to see something, they want to dream. I think people want to believe what they see.”