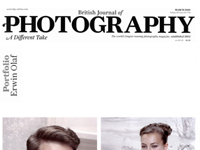 Erwin Olaf is one of the world's most sought-after advertising photographers but, along with a select band of commercial shooters, he's also highly regarded in the art world, with seven gallery reps worldwide and an Aperture book and dozens of exhibitions to his name.

His latest project, "Dusk and Dawn," was shot in two distinct halves. "Dusk," which shows middle-class African Americans in early 20th century settings, is shot in distinctive black-on-black. "Dawn" shows Russians pictured from the same era, in an extremely pale palette. They were inspired by two very different sources.

"I had an exhibition in North Carolina a year-and-a-half ago, an area with a large African American population. And as I watched people's reactions on the opening night, I realised how white my work had become, says the Amsterdam-based photographer. I didn't like it at all. Then one of my set builders showed me this amazing portfolio of photographs of African Americans, taken in 1900 by Frances Benjamin Johnston in Virginia. The people were so different to the stereotype of the time. I decided to do a series [based on Johnston's portfolio, "The Hampton Album," commissioned to document the students and facilities at the Normal Institute of Agriculture], which eventually became 'Dusk.' I shot the pictures black-on-black for purely aesthetic reasons. In the early 1990s I shot a series called 'Black' with the same palette, and I decided that after 20 years I could steal from myself a bit.

"Then I went away for another exhibition, this time was to Russia, where I was staying in a five-star hotel in Moscow. The dining room was decorated in very pale tones, and as I was having breakfast one morning I saw a mother and son. They were typically Russian, very pale and blonde, and sitting at this white table with white chairs and walls. I was half asleep but I thought, 'That's it! I'll photograph the series again in white, reversing the elements.'"

Olaf worked with a team of 10 people to create the scenarios, concentrating on a certain kind of atmosphere rather than strict historical accuracy. He works with a Hasselblad camera and Phase One back for the high degree of control it gives him, but remains open to the unexpected. In fact, he says it's what makes a picture. "It's always the accidental moment. When I was shooting the 'Dusk' mother and child I had the woman standing up, but it was too theatrical. Then I turned to look at the screen and the model sat down because her shoes were too tight, and I realised it was perfect. I started clicking away. I have quite strict boundaries, but within that I can start to improvise."