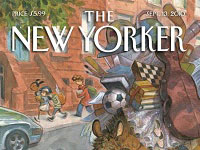 Goings On About Town: Art

Bark, whose large-scale photographs have often had an obsessive, dreamlike quality, shows a new series of landscapes with figures that are both a departure from and an extension of those dreams. Working among waterfalls and in shadowy woods, he takes the wide, omniscient view of classic American landscape photographers. But instead of the traditional solitary gentleman observer, Bark’s people are nude or white-shrouded young men and women whose presence is fraught, furtive, almost animal-like. In three striking figure studies, naked bodies look like they might have been pulled lifeless from the dark water. Elsewhere, seen alongside the rushing cascades, they could be ghosts—pale and cold, haunting the wilderness. Opens Sept. 9.