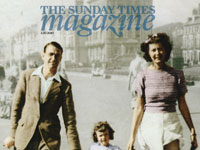 Spectrum: A Plunge into the Unknown

In a departure from the elaborate studio sets he has used in the past, Jeff Bark ventured into the great outdoors for his latest body of work, Lucifer Falls, set in a New York state park. Bark would wait until it was about to rain- and if the weather had other ideas he would set off a smoke bomb to create a misty effect- before shooting his subjects in freezing waters. Lucifer Falls is on show at Hasted Kraeutler Gallery, New York City, until October 16. Visit www.hastedkraeutler.com. Photographs: Jeff Bark.