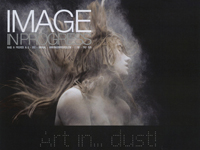 "Photography allows you to just go out and create how you want, what you want, when you want. You're in control of your life. Which is a damned fine place to be."

This is just one of the answers of the great Nick Brand tto the Questions by Claudio Rossetti, Valentina Nicole Scotti and Giulio Speranza, members of the Grigio 18% Association, a partner of Image In Progress.

Born and raised in England, Nick Brandt studied Painting, and then Film in London. He moved to America in 1992 and directed many award-win¬ning music videos for artists like Michael Jackson (Earth Song, Stranger in Moscow, Cry), Jewel and Moby.
It was while directing Earth Song, a music video for Michael Jackson, in Tanzania in 1995, that Nick fell in love with the animals and land of East Africa. Over the next few years, frustrated that he could not capture on film his feelings about ani¬mals, he began to realize that there was a way to achieve this through photography.
In 2000, Nick embarked upon his ambitious pho¬tographic project: a trilogy of books to memoria¬lize the vanishing natural grandeur of East Africa.
The first two parts of the trilogy have been pu¬blished in On This Earth (2005), A Shadow Falls (2009), and On This Earth, A Shadow Falls (2010, combining the best photos from the first two books). Since 2004, Nick has had multiple solo exhibitions worldwide, including in New York, Los Angeles, London, Berlin, Sydney, Mu¬nich, Brussels, and Paris. Nick photographs on medium format black and white film without telephoto or zoom lenses.
His work is a combination of wide-screen pa¬noramas of animals within vast landscapes, and graphic portraits more akin to studio portraiture of human subjects from the early 20th Century, as if these animals were from a bygone era.
In one of his books, Nick explains: “I’m not inte¬rested in creating work that is simply documen¬tary or filled with action and drama, which has been the norm in the photography of animals in the wild.
What I am interested in is showing the animals simply in the state of Being. In the state of Being before they no longer are. Before, in the wild at least, they cease to exist.

This world is under terrible threat, all of it caused by us. To me, every creature, human or nonhu¬man, has an equal right to live, and this feeling, this belief that every animal and I are equal, affects me every time I frame an animal in my camera. The photos are my elegy to these beautiful crea¬tures, to this wrenchingly beautiful world that is steadily, tragically vanishing before our eyes.”
In 2010, Nick started work on the photos for the final part of the trilogy.
In this book, Nick plans to show an unavoidably sad, darker vision amidst the beauty. He had no idea at the beginning of the year that the tragic sights he would see unfolding in Amboseli and elsewhere across East Africa would compel him to decide, in August of 2010, to start Big Life Foundation.
It is his fervent hope is that the work of the Foundation can help slow down and ultimately halt the further destruction of the natural world he loves.
Nick divides his time between his home in the mountains of Southern California, and East Africa.