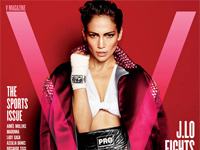 In the mid ’70s, while leafing through the astutely-named boxing publication Ring Magazine, Jean-Paul Goude, then the art editor of Esquire, came across an ad featuring a former beauty queen-cum-bodybuilder. Unable to run full nudes, Goude was on the hunt for alluring female characters he could photograph for his highly respected but somewhat stodgy literary journal. The request had come at the behest of his editor, and when Goude saw Kellie Everts, all muscle and yearning, he knew he had found a champion.

“Bodybuilding was at its lowest at the time,” recalls Goude today. “It had been very big during the ’50s and ’60s, but by the ’70s it was finished, it was nothing. So I looked at that and said, “Wow, this girl looks really nice, let’s check her out.”
A former teen beauty queen and 1967 Miss Nude Universe, Everts was in her mid 30s and still striving to be in the spotlight. According to Goude, she had a desperate but very pleasant demeanor. “She was living modestly in Brooklyn,” he says. “At the time she was teaching young Puerto Rican kids about some sort of religion that she had picked up in California when she was living there.”

Despite the fact that she moonlighted as an exotic dancer, religion was (and continues to be) paramount among Everts’s beliefs. In fact, by the time she met Goude she had become a minister and was giving sermons in burlesque bars while referring to herself as a “Stripper for God,” which eventually became her preferred moniker.

Following the shoot, Goude employed his ninjalike pre-Photoshop skills (what he calls “The French correction”), cutting the film strips and rearranging them so that Everts, whose proportions had not quite retained beauty-queen status, took on an Amazonian quality. “That was the second or third picture I think I’d taken using that particular technique,” says Goude. “Her face and hair were still beautiful, and she had enormous breasts. The only thing I had to do was emphasize the shoulders—which were very narrow—the arms and forearms and the thighs.”

His process, depicted above (left), produced a six-page layout for the magazine that pleased both his model and editor to no end. “For about two years she went to a gym and tried to look like the pictures,” says Goude. He photographed her again a year later, and those images (above, right) eventually landed in Playboy.

Goude says he pretty much lost touch with Everts after he moved to Europe in the ’80s. “She started sending me letters, very long letters—like 12 pages, handwritten, telling me how she communicated with Errol Flynn every night,” he says.
Everts, now in her sixties, has a website that catalogs her life’s history, hawks souvenirs from her heyday, and maintains that she’s “ready to get back into the limelight for whatever opportunities present themselves.” In the year of 2012, anything is possible.