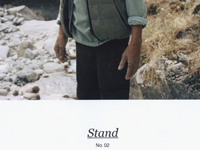 Art changes one’s view upon reality. To heighten awareness and expand our perception of a supposedly well-known reality is the central aspiration of the works by Düsseldorf-based photographer Andreas Gefeller. The Japan Series is his youngest series following Supervisions and originated on the occasion of the project European Eyes on Japan, in which European photographers are invited annually to work in this Far Eastern country.

The series’ focus lies on the Poles. Gefeller photographs electricity posts in at least two single upward views from a perpendicular position. In the subsequent digital assemblage the pole disappears and innummerable cables and current transformers are converted into an autonomous and abstract composition that spreads in front of a monochrome background. The absence of points of reference and orientation opens up a new perspective on familiar situations. Thus, the Poles transcend their original context in order to awaken associations of underground railway plans, autoroute intersections or night photographs of a city’s pulsating traffic arteries.

Other photographs depict plants, which assume distinct forms owing to human intervention, their branches winding around rectangular wire nets or wooden grates. Formally equal to Poles, they too become dissociated from their immediate situative context by means of a surprising and disorientating view from below to become abstract compositions.

Gefeller’s most recent photo works have become increasingly formal and structural, attesting to striking pictorial qualities. Correspondencies to drawing-related concepts such as calligraphy are not merely coincidental, but are supported by the artist’s choice of the printing technique and paper. With his works, Gefeller questions the objectivity of the photographic medium and explores its limitations. Terms such as truth and estrangement are being contested and the relationship between nature and human being as well as the latter’s desire to subject his surroundings to a system is being reflected in a new light.

More than ever, Gefeller engages in the field of tension between nature and urbanity, reality and fiction as well as order and chaos.