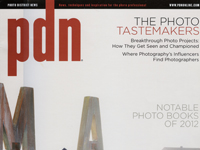 In his exhibitions and books, Paolo Ventura has created tableaux envisioning scenes from World War II-era Italy and the memories of a retired circus performer,using tiny models, figurines and miniature props that he then photographed in his studio. Though created from his imagination, these images often called to mind historical photos of an actual time and place. With Behind the Walls, a collection of prints contained in a hand-painted cardboard box, Ventura has stepped further into the mythic. The story, slight though it is, is elusively explained in brief text, letter-pressed onto a single folded sheet enclosed with his prints. The scenes take place in a walled city, the text says. "No one knows how to leave the city. The people wander the
streets all day in order to forget." The mood is lonely. The black-clad men in his photos stand staring into the fog that whites out the sky, or trudge downcast, hands in pockets. In one image, a man stands in an alley alone, playing a tuba. In another, a man stands on a sidewalk, the lights of a cafe behind him, and golden autumn leaves blow past his feet. Ventura's color palette of pale.. grays and golds, and his wide-open plazas populated only by a few isolated figures suggest the surreal cityscapes of Giorgio de Chirico. There is also an echo of Cubist collages in some of his photos, in which single letters from street signs suggest no words. Ironically, to create this allegorical series, Ventura incorporated photos of actual people, blending them into the sets he created. The boxed set of images comes with a poster size page titled " Polaroid Album." It reproduces the pages of an old-fashioned photo album, with Polaroids pasted in. Some of the photos show men costumed as a tuba player, a uniformed soldier-some closely resembling Ventura himself as well as the sets he built for many of his photos. How the photos and the sets were incorporated remains a mystery. Clearly Ventura continues to stretch not only his imagination but the techniques he uses to bring his imagined worlds to life.