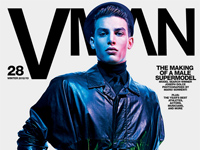 The essence of a man’s style is in his vision. An elegant black tux or a trove of accessories—bow ties, ascots, cuff links, and so on—can’t compare with what is unwearable: true works of art, born of the purest imagination. And Jean-Paul Goude’s works of art are what make him the ultimate style icon. Hailing from the nowhere suburb of Saint-Mandé, in his own words “the dreamland of a typical Parisian middle class,” Goude cultivated a limitless store of fantasies and inspirations that would carry him to the École Nationale Supérieure des Arts Décoratifs in Paris and then to Esquire magazine in New York during its 1970s heyday. Approaching everything from illustration to painted-over photo portraits with what he calls an “entomologist’s precision,” Goude has set a surreal new standard for art direction. He’s carved an extravagant and idiosyncratic nexus between the commercial and the avant-garde, following in the footsteps of his friend the great George Lois and paving the way for generations of artists and designers to come.
Goude’s personal style is simple, amiable, and impactful, his clothes a sober, chicly designed counterpoint to the opulence of his artwork. Photographed often in high-water army and navy cotton drawstring pants and sweaters, Goude is known to pair his timeless, casual ensembles with white buck shoes by Cole Haan, and sometimes white socks—a look on which he holds a virtual trademark. Conjuring otherwordly delights for more than three decades, Maestro Goude has ascended to some lofty fashion heights: playing visual architect to the career of pop legend Grace Jones, creating advertisements for Chanel and Azzedine Alaïa, shooting Hollywood starlets for fashion glossies (including V), and art directing the 1989 Bicentennial Parade (which marked the 200th anniversary of the French Revolution), to name but a few of his brushes with immortality. But his blending of the personal and professional is what lends gravity to all of the glamour. His personal relationships with a succession of remarkable and beautiful women are at the center of his legacy, his craft having been fueled by his most primal passions and the age-old tradition of artist and muse, grounded in truth, beauty, and romance. A grasp of iconography in all of its possibility is how he masters advertisements, performance, fashion, and art, but the greatest icon to come from the world of Goude is unquestionably the artist himself.