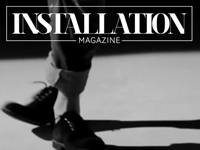 By A. Moret & Garet Field-Sells

Albert Watson is the master of transforming sleek celebrity, editorial, and fashion subjects into objects of fine art and beauty. During a phone interview conducted before the release of 20+20, Watson recalled the tremendous pressure surrounding his photo shoot with cinema legend Alfred Hitchcock. He recalled that “New York was always demanding perfection. It just had to be dead right. The very first shot that I did for a New York magazine was of Alfred Hitchcock. I was very nervous because I had never photographed anybody famous before, but I knew that if I screwed up that shooting I knew that it would be another four years before they would give me another crack at something. ”Of course Watson captured the shot perfectly and suggested that Hitchcock hold the plucked goose by the neck rather than present it on a platter, as the photograph was meant to accompany a holiday recipe. If you look closely you will find a strand of Christmas lights tied around the bird’s neck. It’s those nuances that make Watson’s compositions dead-on.

Why did you decide to pursue your practice on the East Coast?
My wife had a teaching job there and I came in as basically her dependent in 1970 and then I was trying to get work as a photographer and got started fairly quickly in about 4, 5 months and within a year I had a studio and I was working all the time.
Why not Los Angeles?

At that time in Britian, especially in the late 50’s and 60’s there was a gigantically strong influence of America particularly on Britain. In simple terms it was American culture. Nowadays when you think of the Beatles, you think of them as being totally British guys from Liverpool but their fascination was all with American music and they were rockers in the beginning. It was kind of a reverse cultural thing because of the influence that the Rolling Stones and the Beatles had on American culture so it was the other way, but of course the initial influence was the American culture on the British. I was as a child growing up on American movies and cowboy movies. In ‘66 I had a traveling fellowship from IBM and toured all over America and met a lot of interesting people, John Cage, and Charles Eames I met at LA and spent a day at their facility. Then I went back to Britain and I went to film school. When I got the opportunity to go back to America we moved to LA and basically from four years I went from not working at all to having a huge studio. Between ‘74 and ‘76 I was working basically one job of out ten was in New York and by 1976 basically 10 jobs out of 10 were in New York, so I sold everything in LA and moved to New York. The studio was on Melrose Avenue when Melrose had no shops on it. At that time it was totally quiet and calm and Melrose Avenue at that time was in the middle of a lot of sign makers who used to do a lot of acrylic signs and hot dogs signs and stuff like that. At that time I shot everything. Car, fashion, celebrity, movie poster and album cover and so on

What do you find most distracting about your urban environment?

It’s the worst place in the world in that way because there’s a distraction on every single. If you saw the diary that I’m locked into right now… the openings at museums and gallery openings and theatre openings and I’m a member at the DGA so I attend DGA openings so basically this entire thing is going on all the time, you know? There’s sporting events going on all the time. There’s more things museums, galleries, Broadway, plays, movie openings and obviously you have those things in LA but it just seems like there’s more of it in New York. I mean you don’t have the Met in LA. The met is like the British Museum or like the Louvre.

What do you feel is unique to your city?

Probably what I was just complaining about. I ended up having a beautiful penthouse where I see everything where I basically have a 2000 square foot terrace here and I see every single aspect of New York from the Empire State Building, to the Chrysler Building, to the Hudson, East River, the new freedom tower that’s going up, so I see everything. So of course I like that and there’s a lot of professionals in New York who are very business like and very tight. The environment has an effect on you.

What artists have influenced your practice the most?

That’s the hardest question and the reason it’s a hard question because there are so many photographers whose work I really love, you know? I mean really a lot. You kind of say you like the German School of Photography, the Modern, the Becker, Gursky, and Thomas Stern. Brassai, Cortez Irving Penn and Avedon, Gerhard Richter and he’s amazing. So there’s many painters, photographers whose work that you like, you know? It’s a hard thing. What about the Russians? You can keep going with photographers that have done different genres. I like Paul Strand I think he was such a strong and powerful force in photography. I have lots of favorites. I do absolutely love the work of Richter- I love how he moves around.