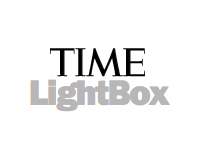 It’s hard to say whether Erwin Olaf’s portrait Olympia Stadion Westend arouses more pity or mirth. In it, a lone figure climbs an indoor staircase, facing away from us, he slumps in seeming resignation as he faces the world outside. It sounds like a profound moment, one that we might even feel uncomfortable viewing. There’s just one problem, though: it’s almost completely undermined by the fact that he looks like a giant Easter egg.

“My idea was that it’s funny to have a clown walk down these stairs,” Olaf says, on the phone from the Netherlands, explaining how this piece was originally meant to be set up. Shot in Berlin in the stadium built to host the 1936 Olympics — the infamous Nazi games — he wanted a man dressed in an exaggerated Weimar-style clown suit to face the camera, and had intended it to be a candid piece. A sort of straight up mocking of the pomp of pre-Nazi Germany, perhaps. But this subject was shy, uncomfortable. “I could not communicate with him,” he says “Every time he walked up the stairs he looked incredibly defeated.”

So he snapped him from the back, and when he got home this apparent b-roll had turned into the main thing. “Then, I got my story!” Olaf adds.

Olympia Stadion forms part of his newest series Berlin, a project that he embarked on after winning the Johannes Vermeer Award in 2011. Set throughout the German capital, it’s pitched as an examination of what he sees as a modern “interbellum” period, a time when the sociopolitical structures that defined the 20th century are being turned on their head, much like what happened in Germany in the 1920s.

“I think that in Europe you feel a little bit defeated in the last few years, and if you travel in the United States also,” he says. And so with this project he wanted to use the past to examine the future, to see the 2010s via the 1920s. But don’t worry, he adds, it’s not as serious as it might sound. “I am not expecting a third world war!” he says, laughing.

Berlin is decadent, lavish and sparse all at once. Coming at a time when Germany has become a dominant force in an ailing Europe, there are certainly uncomfortable hints of the Hitler-Jugend in its fair-haired and porcelain-skinned children. And yet this is perhaps a needlessly simple parallel to draw. Olaf says he believes that children run society in the 21st Century, figuratively of course, and Berlin seeks to make light of this. Indeed, it is the young who are in charge in this series. Stylistically, if Berlin is the photographic equivalent of Jan van Eyck meeting Otto Dix, its children are afforded all the stoic elegance of The Arnolfini Portrait, while its adults — with some exceptions — are treated like the crude burlesques of The Salon 1.

But just like his pathos-craving Armand Henrion-esque clown of Olympia Stadion, there is no seriousness without levity in his work. Often dubbed cinematic, it is always rich, beautiful, expansive, and playful. It straddles the worlds of commercial, art and fashion photography at once, and often pokes fun at each.

Indeed, with Berlin, Olaf might even be mocking our search for a meaning behind these images. It all seems like it could be an exploration of nothingness. Where van Eyck and Dix focused on slow-revealing detail — The Arnolfini Portrait reveals more the longer one looks at it, for example — there is a studied emptiness here that Olaf himself admits to: This is photography, captured with a Hasselblad in expansive hallways, not meticulously-planned painting.

“I want [my work] to become more empty,” he says. ”I don’t know what the story is in every picture, it’s the idea of the story, the suggestion of a story.”