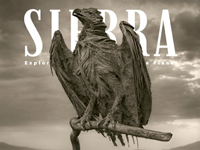 Nick Brandt’s evolution from animal portraitist to anti-poaching activist can be traced in the titles of his coffee-table trilogy: On This Earth (2005), A Shadow Falls (2009), Across the Ravaged Land (2013). The sentence formed by those three clauses, and the tone shift within, is intentional. When Brandt began capturing images in Kenya’s Amboseli National Park in 2001, he primarily intended to pay homage to a threatened landscape and the stately animals that live there. But not long after his first book came out, he grew to understand that while the landscape itself was relatively safe, at least within the national parks where he worked, the animals were being slaughtered at an astonishing rate. Elephants were particularly vulnerable, with ivory poachers killing tens of thousands a year—including many that Brandt had photographed and come to admire.

The ensuing rage triggered his activism and tweaked his art. His imagery, once so flattering that it verged on idolatry, slid toward the macabre. Regal portraits of lions and rhinos and elephant families gave way to an eerie oeuvre of calcified birds, bleached skulls, and taxidermy.

But his anger had a hopeful byproduct as well, prompting him to create the nonprofit Big
Life Foundation (biglife.org), which now trains and equips hundreds of anti-poaching rangers in and around Amboseli. Brandt, 48, grew up in England and today lives off the grid in coastal Los Angeles County. Sierra reached him by phone to ask how his artistic vision and personal motivations have shifted since he first visited Africa more than a decade ago.

Let’s begin with logistics. How do you get these photos without using telephoto lenses?
Patience.

Say you’re trying to get a close-up shot of a lion. Describe a day, or four hours.
You have to expand out from hours to weeks, because in a typical four hours, absolutely nothing happens. A typical four hours is spent watching a group of lions lying on their backs with their paws sticking up in the air, and me thinking, “What an insane way to spend your life,” and becoming more and more convinced that I’m never going to get another good photograph.

What do you do during the downtime?
Well, I never lose my patience with the animals. When they do present themselves for their portraits, as it were, I am sort of being graced by that.

Do you have the same kind of patience with people?
Not remotely.

So it’s not like you’re walking up to them, stalking them, hoping they won’t eat you.
No. You would never get a photograph that way, never mind that it would also be just stupid and dangerous.

It sounds as if you don’t have any magical thinking that you’re somehow bonding with these animals.
Absolutely none. I’m not Doctor Dolittle. Any animal can, at any point, decide, “I’ve had enough” and lash out. I’m not nervous, but I don’t take any of it lightly, ever.

Why don’t they run away from the vehicle?
They’ve become habituated to vehicles driving close to them without anything bad happening. But the sound or sight of a person walking through the bush, that would freak them out.

You’ve talked about how, when you first started shooting, you saw these beasts as magnificent, and you used a photographic style that paid tribute to that.
I was trying to record a last testament to this Eden, this paradise. As part of that, I was hoping to show the animals’ majesty. But obviously, that’s changed.

Are you using different lighting? Different lenses? Shooting from different angles?
I still shoot willfully, stubbornly, in the same impractical fashion that I always have, with two fixed lenses and a medium-format film camera. But I look back at some of the early photographs and I’m embarrassed by them being too overworked.

Overworked in what way?
I would get too carried away with lightening and darkening localized areas. Dodging and burning, basically. I’ve also stopped using infrared film, because it gave that world a paradisiacal view that’s no longer appropriate.

You’re truly embarrassed when you look back?
With some images, yes. I bought back the rights to my first book so that I could actually eliminate some of the photographs that I just think are not good enough.

Not a lot of artists have that opportunity. Their early, mediocre work lives on.
The trouble with the Internet now is that once you put it out there, it’s out there forever. Even the really crappy stuff that you once thought was really cool, it’s out there and you can’t take it back.

Do you think you’re a better technical photographer now or just a more mature person?
I’m a better photographer. When I started out, my work became recognized very quickly, so the photos were being widely disseminated while I was still sort of in training. You know how they say that it takes 10,000 hours to really excel at something? I subscribe to that. Hopefully, all of us are getting better at whatever we do. The Samuel Beckett line is “Fail again. Fail better.”

When you first went to Africa to shoot these animals, what were your hopes and ambitions, and how have they evolved?
As I said, initially I wanted to create a last testament for these extraordinary animals in these extraordinary places. What I didn’t imagine is that the destruction of those animals would escalate to the degree that it did. I’m a pessimist, but I still didn’t imagine that it would happen this fast.

How quickly did it escalate?
In 2004, ivory was $200 a pound. Now it’s approaching $2,000 a pound. There are now an estimated 35,000 elephants a year being annihilated—it could be as high as 50,000. That’s 10 percent of the estimated remaining elephant population being killed off each year, so that basically leaves us not even a decade. There are an estimated 20,000 lions left in Africa today, probably less. That’s a 75 percent drop in the last 20 years. There are probably fewer than 10,000 cheetahs left. I hardly see them. If you look through my new book, there are no cheetah photographs. It became too damn hard to find them.

How did Big Life Foundation start?
A few people were telling me I should start my own foundation. I figured it was completely self-aggrandizing. Who am I? But after I finished my second book in the summer of 2008, I stayed away for about two years, and when I went back was shocked at the change. In Amboseli, where I photograph all my elephants, a lot of the elephants that I’d known over the years had been killed, and they were still being killed on an almost weekly basis. In Africa, those animals are protected only within the confines of national parks. Amboseli is only 100,000 acres, and most of the animals spend 80 percent of their time outside the park. As soon as they walk out, they are in unprotected land populated by human beings—many of them poachers. Due to the massively increased demand for ivory, the elephants were getting killed in much greater numbers, and nobody was effectively protecting them. [The park is near] the border between Kenya and Tanzania. Poachers would come across from Tanzania, kill elephants in Kenya, then escape back over the border—poaching with complete impunity. It seemed very obvious to me that there needed to be a coordinated, cross-border anti-poaching operation. We needed fully equipped teams, and we needed somebody who actually lived there to run the teams. Too often I saw NGOs come in and try to run programs from their offices in Washington or London or even Nairobi without having a sense of what it takes to make programs work effectively. The only real hope of conservation in East Africa is working with the local communities. Conservation supports the people, and then the people will support conservation.

Did you have experiences working with locals?
I got in contact with Richard Bonham, who was running the MaasaiLand Preservation Trust, and he said, “This is exactly what I’ve been screaming about for the last 20 years.” Very fortunately, I was able to raise half a million dollars from one of my collectors, in my very first meeting. With that money, we were able to build outposts, hire rangers, fully equip them, buy vehicles, and put them into that ecosystem. We started with just a few outposts, and three years later we have 31 of them. We’ve gone from 40 rangers to 315. It makes it sound like we’re rolling in money, but we’re really not. That’s an incredibly efficient use of the money.

Is the program working?
Among the poaching grapevine, the word is out to stay away from Amboseli because you stand such a great risk of being arrested.

Are these rangers formally deputized? Do they have the authority of the government behind them?
Yes, we work in conjunction with Kenya Wildlife Service and Tanzania National Parks.

Do they carry guns?
On the Tanzanian side, yes. On the Kenyan side, not currently, but shortly we should have Kenyan police reserve staffers who will be able to. Nobody has yet been hurt, but there have been a couple of close shaves with bullets whistling past people’s heads.

When you first went to Africa, you had one artistic goal in mind. If you go back in five years to shoot, what do you think your goal will be then?
I know that my quote “mission in life” is to continue to focus on animals, the environment, and the disappearing natural world. How I’m going to do that in my next body of work, I’m not sure right now.

You’ve crafted a rare existence where you’ve married your artistry with your advocacy. I suppose you must sit back and give thanks for that, but also at times ask yourself, which are you—an artist or an advocate?
[Long pause.] Can I be both, please? I find it quite satisfying to merge the two. Ever since I was a little kid, I’ve been obsessively conservation-minded. As I got older, I just felt like, these animals have given me so much, I should give something back to them.

Do you ever worry that your artistry has suffered because of your advocacy?
I worry that the photography is potentially compromised because I have to devote such huge amounts of time to Big Life, to conservation, when I should be creating.

What about in the pictures themselves? Some people might detect an element of propaganda in much of your work.
I really don’t ever take a photograph for anybody other than myself. I never second-guess what might be popular or what somebody else thinks. If you go down that path in anything creative, you’re on the road to artistic mediocrity. I just want to shoot the photographs that I want to shoot whether people like them or not. Those calcified photographs [see opposite] and the trophy-head photographs [see above]—did I really think anyone was ever going to buy them? I took them purely for myself. To my complete surprise, the calcified photos went viral. They’ve had millions of views online. And actually, despite that, I’ve only sold four prints.

Wow. Really?
My mom thought they were really beautiful.

Those feel a little more political.
Not trying to be. I was just trying to take portraits of those mounted heads in their natural landscape. Like the lion is looking wistfully out across the plains where it once roamed. It’s not meant to be an antihunting message. I can rant on quite happily in antihunting mode, but those photographs are much more about portraits of those animals in death, looking out across the plains where once they roamed. n