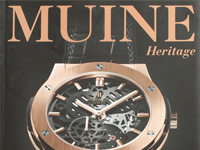 I met with Andreas Gellefer at the Gallery Baton. He had arrived in Seoul prior to his first solo opening in Asia. He planned to stay two weeks longer after the opening and spoke of his plans to go up the 63 Building, his eyes twinkling. “Seoul is a city that conveys both calm and nervousness. It is captivating that people can coexist without conflict in such a large place. I see numerous European and U.S. brands here and there in the city, so I can surmise that it has gone through globalization.” The project he is working on in Seoul will form part of the Blank project currently in progress. Humans are absent from these faded black-and-white images that look as if they have been bleached; instead they are only packed with massive, orderly module-type buildings. Is there any city more perfect for the Blank project than Seoul? Andreas Gefeller has a sharp eye even when he visits a place for a short time. “The first thing I do is pick a city and use the Internet or Google Earth to find what motifs I can use or what is interesting. I always have to walk around extensively when I get to that city. The aim of the project is to convey a special quality or significance, even if it is nothing spectacular.” The characteristics he calls “special“ that he has picked out with his eagle eye are peculiar.


His series of photos called The Japan Series, depict only lampposts. I have never heard of a photographer who travelled to Japan and only photographed lampposts because he thought they were a representative feature of Japan. Perhaps he found them to be intriguing, because in countries like Germany, they have adopted the progressive method of concealing power lines below ground. He had more profound things to say. “What I saw in the power lines was modern society’s networks, communication, and barrage of information. Don’t the lampposts extending out in that regimented fashion with the transformer right at the center remind you of the circulatory systems of living organisms?” He photographed two images of two adjacent lampposts and erased the lampposts in a digital process. This created a scene as if the identical power lines are floating in midair.
Does the name Andreas Gefeller sound unfamiliar? His name is not yet a household name in Korea, but he is a rising star from Germany. He has garnered various photography honors in recent years, such as the German Photo Book Award 2012 and the Lead Awards. He majored in photography at Essen University in Germany, the same school that nurtured the creators of the Typology School in modern German photography. Perhaps that is why one says reflexively upon seeing his works “Is that a German artist’s work?” It is characterized by a very logical theoretical basis and can only be born of a minute process.

His first series of work that created a splash in the photography world was his Soma series. It is obviously an island that would be depicted as a paradisiacal resort on TV or advertisements, but in the photographs, it looks unfamiliar. To complete these works, he travelled to Gran Canaria, Spain, four times. “Soma” means a hallucinogenic drug in Greek. The drug used in the novel Shoene Neue Welt (Brave New World), called “soma,” to monitor and control the colonial aborigines. The novel focuses on the fantasy that the characters live in, emphasizing the brutal reality of life, once that fantasy is lifted. Vacations hold the same idea in real life. People can escape from monotony and stress by going on vacation, but it is still a brief moment of escape.Andreas Gefeller captures this feeling in the unfamiliar, artificial colors that seem to be floating in midair. According to him, people are deceived by their eyes. In the darkness of night, people only detect darkness. Cameras perceive more than people. They perceive a variety of distinct colors. Long exposure allows the camera to capture the massive array of colors to their full intensity. Upon viewing Soma, you understand his succinct statement about why he began doing photography, “After I realized that you can see more with photographs than your own eyes, I started taking photos when I was fourteen. I was very interested in the natural world and the universe. I was surprised after taking a long-exposure photo once, that a camera can receive much more light and can capture much more than what I can see.”


His most representative work, Supervisions, is a view of the world from an omniscient viewpoint if it were a novel. He combined hundreds and thou-sands of photos he took by hanging cameras at a height above 2m, to create a new space. Calling it “Like a Bird,” he said it was a bird’s-eye view. It creates a an uncomfortable feeling of insignificance and being watched. “People can be observed anywhere they are, and everything is pre-planned. Humans use a very narrow space to forge their lives. I want to make people question if there is someone observing and watching us.”

In his recent popular work, What Is an Artist?, there is a saying common among novelists. “Poverty and want are the enemies of artists.” This is true of artists as well as novelists. If you are earn-ing money when you should be working on your art you cannot do good work. Andreas Gefeller is relatively lucky because his period of destitution was fairly short. He said, “I have been living an artist’s life, only focusing on my work,” subsequent to his unveiling of Soma in 2004. Though it would be profitable to sell his works at a high price, I asked what he thought as an “artist” in a time when famous, commercial artists are being made. “That’s a difficult question. That I was able to become who I am now may have been owing to my ideas coming upon me by chance, and also because I found my first gallery, which conferred value to my work. But even so, I think that what is important is that I do what I need to do, not what other people think or want. This sometimes gives me a hard time or confusion. But all I can do is believe in myself and work toward balance.”