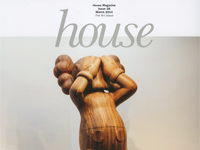 The photographs in Jeff Bark’s newest body of work, Goldenboy, exist in an eerily ambiguous time of day, somewhere between the burning, first rays of dawn and the last glow of sunset. Suffused by a warm, languorous light that evokes the close heat of Southern California, and set amidst colours and textures that recall the 1980s, the series was inspired by aspects of Bark’s own autobiography. It was in his brother-in-law’s Southern California backyard in the 1980s that he made his first photographs, and Goldenboy’s protagonist is the same age as Bark was during those very years.
Although most of the photographs appear to take place outside, and have an authentically rich saturated West Coast palette, every one of them was actually taken inside Jeff Bark’s New York garage, on a meticulously constructed set. Bark’s insistence on building these complex, intricate sets—working in the controlled environment of his studio, rather than at the whim of the elements—is an essential element of his time-consuming process (the accompanying exhibition includes a similarly painstakingly crafted installation complete with live parakeets).
Despite the warm, California glow, in Bark’s world something is always awry: symbols of his languid existence are juxtaposed with disturbing, even macabre details. As he sits in a chaise longue eating popsicles, a dead plant studded by sharp spikes hover ominously behind him; an elegant arrangement of yellow roses is corrupted by the remains of a keg-party, their roots flooded by empty plastic cups. It’s a disturbing clash of idyll and decay, the indulgent and the morbid.
Jeff Bark, who was born in 1963 in Minnesota and is now based in New York, is part of renowned national collections including the Wilson Centre of Photography, the Sir Elton John Collection, and the 21 Century Museum, in Louisville, Kentucky. His photographs were recently included in the group exhibition No Fashion, Please! at Austria’s Kunsthalle Wien, along with such luminaries as Philip-Lorca diCorcia, Erwin Olaf, Hanna Putz, Viviane Sassen, Sophia Wallace, and Bruce Weber.