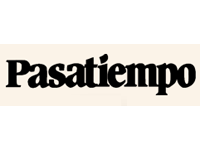 Voyeurism is seldom explored in depth as an aspect of looking at art, but it’s a crucial part nonetheless — both for the artist working from life and for the viewers, one step removed from the original action though they are. New York-based artist Marc Dennis is known for his hyperrealist portraits of spectators at art shows standing before near-exact replicas of famous works of art, sometimes playfully posed before a painting in such a way as to suggest a physical interaction between viewer and canvas. A new body of work by the artist, a series of comic-styled drawings, also touches on the voyeuristic tendencies of society.
Dennis’ drawings are in part made from observations of the people around him when he, like many of us, suddenly finds himself to be an unintended eavesdropper on one-sided cellphone conversations. Dennis’ series, on view in the exhibit A$$holes on Cell Phones at Zane Bennett Contemporary Art, is a wry look at the often absurd contexts in which cellphone exchanges occur, created in a medium that’s common to popular culture and that inspired seminal postwar artists, most notably Roy Lichtenstein. The exhibit’s catalog, which features an essay by art critic Peter Frank titled “Marc Dennis: Comicommentaries,” is available at the gallery. Pasatiempo spoke with Dennis about the genesis of this body of work, only to have the conversation interrupted — not rudely, but fortuitously.

Pasatiempo: The single-frame comic-book style of the drawings seems a departure from your hyper-realistic paintings. Has comic art been an ongoing preoccupation of yours?

Marc Dennis: I grew up in a family of five boys. We were definitely into comic books. But, for some reason, I was the only one blessed with the skill to draw. The way I learned to draw was through comic books. I would copy everything — from Sgt. Rock to Captain America to Archie comics. I did this probably right up to high school, when I went in a different direction and discovered Robert Crumb. All my life I’ve had a fascination and incredible respect for comic-book art. There are particular artists I hold up as high as I would Titian, Caravaggio, and Picasso.

Pasa: Who are some of your favorites?

Dennis: I was into Joe Kubert, Steve Ditko, and Jack Kirby. These are all guys who did war comics. I read mostly Sgt. Rock and Conan the Barbarian growing up. John Buscema was the artist for Conan, and he was one of my heroes. I liked artists like Frank Frazetta. He was my junior high Caravaggio. In college, Caravaggio was my hero — and still is, for every reason in the book: composition, sexuality, hyperrealism. This guy knew how to paint. I never heard of Lichtenstein until I was in college. When I read about Lichtenstein, I thought, “This guy is copying all my boyhood idols.”

Pasa: Was there a specific incident or series of incidents that led to you creating this series?

Dennis: In 2008 I was in New York City. I went to the East Village. My friends told me about this cool little Belgian café that offered a good breakfast, and I love a breakfast next to a park. I’m chilling out. It was a beautiful morning, and some [jerk] — first of all, the ring on his phone was obnoxious. You know what I’m talking about. We’ve all been there. I don’t care if they pick crickets or the theme song to The Good, the Bad, and the Ugly. Just put it on low if you’re sitting in a restaurant and, my God, get up if you answer. It’s etiquette, right? So he answers the phone and he goes, “Hey, man. What’s happening. You coming over?” This is where it started. Evidently the person on the other end of this phone call had different plans and wasn’t coming over and meeting this guy at the restaurant, so the guy got irate and started speaking angrily and sounded like a real jerk. I remember him saying, almost to the word — he sounded like a comic-book character — “Whatcha mean you ain’t coming over, damn it?” I looked around and everybody’s looking at him. Everybody’s looking at me thinking I had to do something about it because I’m the guy behind him. Whoever he was talking to started saying something and he interrupted. Now he curses. I’m waiting for my eggs. I didn’t need this. I turned around and gave him one of those faces that says, “Shut up, hang up, or step away from the restaurant.” He kept talking for a few minutes and A$$holes on Cell Phones was born. I like to make art that has a certain irony, a certain sense of humor. He’s actually in one of the drawings, but it’s not that conversation and it’s not a Belgian café. I don’t know if I’m guilty of being an [idiot] on a cellphone at some point

Pasa: I know I have been, unfortunately.

Dennis: I love that you said that. I remember being in a Brooklyn cinema watching Spiderman. It was a rowdy neighborhood, so I was an idiot for going there to begin with, but this guy in the back row starts getting into this conversation, loudly. I finally just stood up and spun around and said, “Yo, man, you’re in a theater. Shut the [expletive] up.” The guy yells at me. I didn’t say a word. I did my deal and now I’m going to get shot so this is not a good thing. It occurred to me I had to do something about this because, at that point, in 2009, I had my first child, a little girl, and I thought, “No more can I speak out like this. I’m going to get shot, and I’m a dad.” I always thought making art could be, in some social-activism way, maybe, like a weapon. It could be funny. It could touch everyone’s nerves. I always wanted to do an entire series. I had to listen carefully to certain people and find tidbits of conversations that would be interesting, intriguing, and that would span certain sectors of our society, tap into some different ethnicities, different systems of thought. I didn’t want to be biased, but I wanted to be real.

Pasa: So these are actual overheard conversations?

Dennis: Yes. All of them are overheard conversations. Granted, they’re not true conversations. They’re just blurts. There are a lot of people who have proper etiquette when they get on their phones in public places, but people who blurt — you can pick up their sentences. My God, it happens everywhere I go.

Pasa: It does happen everywhere, from fast-food restaurants to theaters. I heard someone answer their phone during an opera performance once. In some ways, cellphones are an equalizer. It has a strange power to make us insensitive and thoughtless about our surroundings, regardless of social class.

Dennis: You know, my father was born in Havana, Cuba, and my mother was born in Boston. My dad’s like Ricky Ricardo, a very tan Ricky Ricardo, and my mother’s like Lucy, and we’re Jewish, so I would say to my friends, “I’m a Jewbano.” I wasn’t trying to be politically or socially correct in any way. A lot of the conversations, I’m hoping, will tap into how we’re united and how we’re divided. I don’t shy away from that. But when a guy in a nice suit says, “Shut the [expletive] up” on his phone in the middle of a Jeff Koons exhibition at the Whitney Museum, I think all our judgments are kind of wrong about people. I’m telling you this because it’s the meat off the bones of my intentions with respect to these drawings. I see the humor in all of it. It’s the cellphones that make us turn into [jerks].

Pasa: How about the figures in the drawings? Are they all based on actual people like the guy in the Belgian café?

Dennis: No. They’re from recollections, but also made up. A lot of the ideas are derived from early comic-book injury — I mean imagery. That’s funny. That was an incredible Freudian slip. I try to keep the clothing the way I remember it, like that one of the goth chick who has this funny sock-sleeve on, and she’s eating a Whopper. She was talking about auras and going on about incense and chakras. Here she is, a goth chick eating fast food and talking about chakras. That’s beautiful. That’s so Tarantino. I’m actually standing outside my studio now because a delivery guy is dropping something off. He’s on his cellphone.

Pasa: It’s fascinating how a cellphone can make us lose touch with our physical environment because we’re too distracted by whatever is happening on the other end. I recall being on my phone in the middle of a supermarket, so absorbed in the conversation that I forgot where I was and what I was there for and caught myself pacing back and forth. It must have looked ridiculous.

Dennis: No one can deny it. People almost go into a trancelike state — he’s waving to me from the window. There’s something to be said about the fact that you can have this device and talk. It’s opened up doors, but at the same time we’ve become almost like zombies. It’s a blessing, but it’s also a curse. Give me one second. I’ve got to talk to this guy with the truck. (Oh. It is? The guy didn’t tell me that. I had no idea. What? I had no idea this was coming.) Michael, I don’t know what the hell they’re bringing me. It’s like on a boat. Now the guy needs my help. I’m actually carrying this thing while I’m talking to you. Can you give me a call back in like five minutes? (After a brief pause, Pasatiempo called Dennis back.)

Dennis: It occurred to me that I was just being an [idiot] on a cellphone. That was the best thing that’s ever happened in an interview in my life. People aren’t even going to believe you. They’ll probably be on their cellphones while reading the article. If I don’t make it to this opening and you are there, check out how many people are either using their phones to take pictures of the [jerks] on cellphones or answering their phones in front of one of my drawings. That’s what I really want to see.