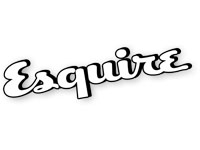 In its 81-year history, Esquire has worked with some of the most talented and legendary photographers in the business. One of the more inventive artists we've collaborated with is Martin Schoeller, who shot a series of iconic portraits that ran in our May 2009 issue. Schoeller's portraits were divided in such a way that the readers could interchange facial features of celebrities and other notable personalities. One could, say, give George Clooney President Obama's chin or Justin Timberlake's nose. The cover was one of the most memorable we've ever run.

Schoeller is known for his imaginative, powerful pictures, which are showcased in his new book, Portraits. The collection offers several previously unpublished images of some of the world's most famous faces and, in the words of Jeff Koons, who wrote the book's foreword, "an honest moment with each individual."

Schoeller's work will be on display through January 23, 2015, at Hasted Kraeutler in New York.