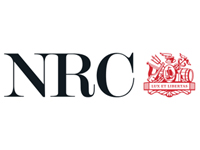 “Repulsive.” This was how Janneke Wesseling, writing in this newspaper, described Erwin Olaf’s retrospective in the Groninger Museum eleven years ago. The critic had been scandalized by the galleries full of kinky party photos. Where, wondered Wesseling, is the double meaning in the erections and the quivering flesh, the baroque costume parties and the many transvestites and Downs Syndrome sufferers he portrayed? One-dimensional work, concluded Wesseling, which leaves nothing to the imagination and shuts the viewer out.
In an interview with Elsevier five years ago, Olaf said that the vitriolic review had really hurt him. But in the end the criticism helped him change course. “It was a kind of liberation. I didn’t have to shout from the rooftops any more.”


In the years that followed Olaf made a number of melancholy photo series in 1950s settings—series that made his name internationally, thanks in part to a beautifully produced monograph of the new work published by American photo book publisher Aperture in 2008.
There is now a sequel to this publication, simply entitled Erwin Olaf Volume II. This unassuming title reflects the restraint that has come to typify Olaf’s work. The technical perfection remains, but the extravagance in his stage-managed images has as good as disappeared and the digital box of tricks gets opened far less often. Where loud music once resonated in his photos, in his current flower still lifes and hushed portraits shot in hotel rooms where grief hangs on the walls, it is quiet.


For Volume II Olaf has drawn on six recent series, and added some stills from new films. He elaborates on what he has done before, but his images have become less narrative and increasingly more serene.


This tranquillity is manifest in the series Berlin, which Olaf made with money from the Johannes Vermeer Prize, the national award he received for his lifetime oeuvre in 2011. For the first time in years he did not use sets by his regular set builder Floris Vos, choosing instead to work on location, for example in the Freemasons’ Lodge that Hitler attended. In these emotionally-charged places in Berlin, Olaf portrayed young girls and faded theatre stars, photographs about the tension between beauty and transience.


Two years ago Olaf published part of this series in DeLUXE, this newspaper’s magazine. Afterwards he made a number of the images more subdued. Take the most anecdotal photo in the magazine, of a white boy in a double-breasted suit in the Freemason’s Lodge, who raises an accusing finger at a black athlete with an array of medals on his chest.


In the new book the boy has disappeared and the photographer has stepped into the picture in his place. In the hall of the lodge he stands before a staircase with a bag in his hand, on the way to the light. ‘Self-Portrait’ is now the title of the less uncomfortable photo, which has gained in warmth by being reproduced in black and white in the book.


It would have seemed inconceivable twenty years ago, but Erwin Olaf has become an artist whose great theme is emotion. In interviews he says he is seeking new horizons and that you change as you get older. That may be so, but perhaps Janneke Wesseling deserves a least a footnote in that development.