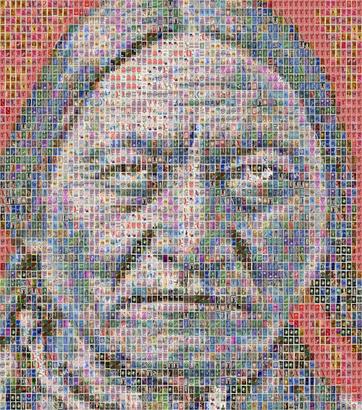 Daniel Voelker was born in 1977 in Frankfurt am Main, Germany.

After graduating from the “Fachakademie für Fotodesign” in Munich in 2003, Daniel started working as a fashion and portrait photographer before he shifted his focus towards art and worked on numerous art projects in Europe, Asia and America, starting with his first exhibition in 2006 during Art Basel Miami Beach, showcasing “Crossover”.

One of his most recent series was created over the past 8 years. "Stamp Mosaics" are large scale, iconic portraits made of thousands of vintage postage stamps glued together one by one.

Another focus of his work is his love for photography, especially film photography, which inspired him for “Transience”, “Slides” and “Overdose”.

Voelker's artworks are in major private art collections and have been featured in prominent publications, such as The Economist, L’OFFICIEL HOMME and many more.

Daniel Voelker lives and works between Germany and the United States.