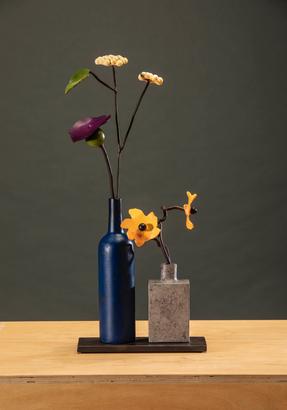 The Art and Nature of Meditation with David Kimball Anderson

As a self-taught oxy-acetylene welder and former metal sculptor, he has a lifelong attraction toward steel and bronze, whether ground to brilliant perfection or left to rust, old and abandoned. As a meditator, he is drawn to the cultivation of awareness, what Buddhists call the view or awakening, a continual practice of returning again and again to this moment just as it is.

As David says, there is a story, a reason, or a drive behind each piece. His practice through the work is to “to take foot off gas, put things in neutral, to realize a pause, quieting the chattering mind.” Long ago, a student of his was trekking in Nepal and came to Namche Village, where she became very sick. She needed to be sent, lashed on a pony, up a steep trail alone, then to be airlifted out to Kathmandu. David made a piece about the pony who carried her called Pony Trough, an ode to this hardworking creature. Another lovely work is cast aluminum cornice with some simple prayer flags, like a postcard from Namche. Though minimal, the gesture is evocative of place, meaning, devotion, lineage. Born from tradition, it bridges East and West, past and present.

David’s subject matter moves fluidly between organic chemistry, the heavens, bodily energies and senses, nostalgia, emotion, time, and space. He takes inspiration from the immediate sensory world. Nature inspires him very much, as does old farm equipment, rusted steel fixtures, and religious articles. He shared that, “Where I surf in Santa Cruz there are concrete slabs, and where I walk in Hastings-on-Hudson, New York, there are these rocks with great appeal. I participate with the image I create based on what I see from observation. I often photograph and then recreate in steel. The format is more modernist sculpture.” David’s references are many, including descansos, the New Mexican roadside shrines to the dead. Like Tibetan prayer wheels, or the religious items available in Rome, David enjoys objects and events that invite the public into spiritual experience. What he loves about the descansos in New Mexico is that on holidays, families come out to honor their dead, as in a wake. For him, spiritual practice includes not just meditation and mindfulness, or science and astronomy, but once again, active observation and thus participation.