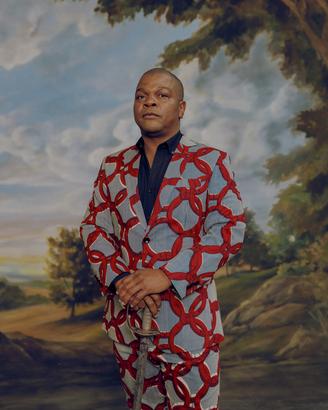 Micaiah Carter’s work is a singular alchemy of contemporary youth culture, fine art, street style, and the certainty that the simple act of representation can be a force for change. His vision is all his own, but within his photographs are echoes of the Black Power movement, the art of Carrie Mae Weems and Viviane Sassen, the seminal street photography of Jamel Shabazz, and the work of British fashion shooter Alasdair McLellan. “I really want my photography to be a quality platform for representation of people of color that hasn’t been seen before,” says Micaiah, who is breathtakingly clear of purpose for someone still early in his career. His images are preternaturally sophisticated. His lighting is intentional but not attention-seeking. And his subjects always seem fully themselves, whether he’s photographing a celebrity, a musician, a fashion story, or an ad campaign. Micaiah is currently working on his first monograph, 95 48, whose title refers to his and his father’s birthdates and which takes as its inspiration photographs of his dad and his friends during the 1970s. He is based in Brooklyn.

Ones to Watch: Micaiah Carter
Go To Link

Micaiah Carter: My Year in Photos
Go To Link

A Picture Gallery of the Soul at the Katherine E. Nash Gallery, University of Minnesota
View more

The New Black Vanguard: Photography between Art and Fashion
View MoreGo to Link