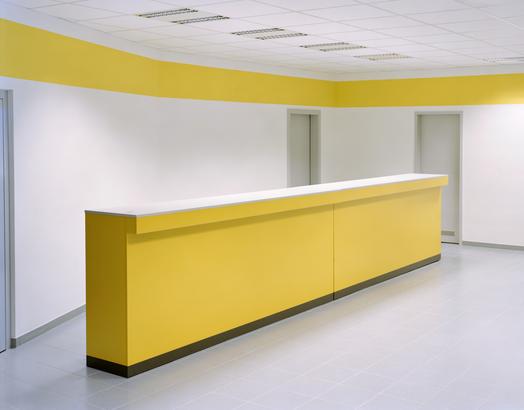 Hasted Hunt is pleased to announce its upcoming exhibition of photographs by Julian Faulhaber, running from October 30 - December 13, 2008. There will be a reception for the artist on Thursday, November 20th from 6 to 8 PM.

Faulhaber’s subjects are vibrantly colored yet austere newly constructed contemporary spaces at the moment of completion. The artist finds a marriage between Modernism and Minimalism with a unique tension between reality and abstraction. At first glance the works seem like fabrications, but these are straightforward photographs of real urban settings, made with an 8” x 10” camera, lit by available but artificial light. The final print is a traditional darkroom chromogenic print.

The settings are immaculately spare and clean, saturated with color, and there is no post-production manipulation of the images. The simple geometry is hypnotic, Utopian and sometimes ominous. These discovered spaces have a biomorphic grace with curves and corners folding into one another. The solitude of Faulhaber’s subjects-- nightclubs, loading docks, shopping malls, sports arenas and apartments-- appears undisturbed and eerily hermetic.

The title “Lowdensitypolyethelene” references a synthetic thermoplastic that cocoons the world with layers of branched out molecular chains. “LDPE” is a metaphor for these architectural spaces that act like models made from Lego kits. The artist manages to make landscape behave like still life. The work is evocative of both Thomas Demand and James Turrell.

Faulhaber has the ability to beguile with an intrepid color sense, an ability to exploit both sly and overt abstraction, and a healthy appreciation for the threat that festers beneath the surface of the everyday. --Nord Wennerstrom, ARTFORUM

The artist made his local debut in the First New York Photo Festival in DUMBO earlier this year in “Chisel” curated by Kathy Ryan. Ryan, director of photography for The New York Times Magazine has commissioned Faulhaber several times, in New York, Denmark and Spain. He has also had solo gallery exhibitions in Frankfurt and Dresden and has been the recipient of a number of awards in Europe including Reinhart-Wolf-Preis 2006 and a nomination for the ING Real Photography Award of which he was a finalist in 2008. Faulhaber was born in 1975. He works and lives in Dortmund, Germany.

For visuals or more information contact the gallery: info@hastedhunt.com