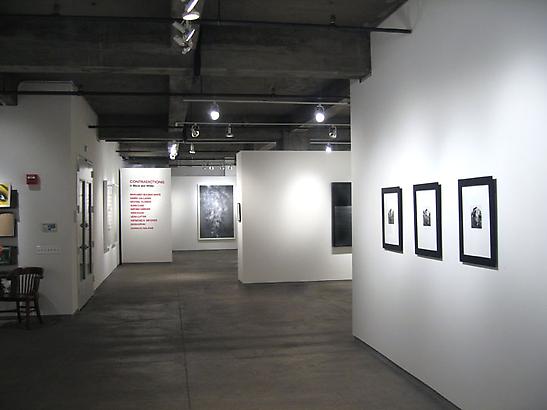 Hasted Hunt is pleased to announce “Contradictions in Black and White: Photographs by Margaret Bourke-White, Harry Callahan, Michael Flomen, Adam Fuss, Nathan Harger, Idris Kahn, Vera Lutter, Raymond K. Metzker, Irving Penn and Horacio Salinas”. The exhibition opens on January 8, 2009 and runs through February 28, 2009. There will be a reception on Thursday, January 8th from 6 to 8 PM.

The photographs in “Contradictions in Black and White” all deal with representation and abstraction, as well as chaos and order, artists making aesthetic sense of disparate elements. They make the real unreal and vice versa. The most basic contradiction is black against white, with light the essential and existential tool of photography used in search of meaning. The images in the exhibition are Modernist and formal explorations of pattern and repetition, edge and shape, randomness and purposiveness. The photographs are visual distillations of the seeming banal: architectural facades, trash, snow, and grass, even traffic. These artists question the nature of the photograph and the photographic “reality”.

“Contradictions in Black and White” demonstrates the artists’ ability to deal with seeming chaos, ordering it within the photographic frame with the range from black, the confluence of all color, to white, the total absence of it. There is a further contradiction here because there seem to be no limits within this; the parameter is infinite between these opposites.

The legendary photographers in this exhibition are Margaret Bourke-White (1904-1971), Harry Callahan (1912-1999), and Irving Penn (born 1917). Included in “Contradictions in Black and White” are a number of Bourke-White’s industrial abstractions – her “landscapes of design,” Callahan’s classic architectural and grasses studies, and one of Penn’s platinum-palladium deli bag still lifes. All of these works are prime examples of artists focusing on the commonplace yet transcending it.

Ray K. Metzker’s formal composite has a jagged jazz syncopation of white on black achieved through cropping and multiple printing. This contrasts with Idris Kahn’s work of musical scores, with line literally resonating, intensely and anxiously repeating. Michael Flomen captures nature with light and reveals an unseen dimension, “black” snow and “constellations” left by fireflies on photographic paper. The very basics of camera-less photography are also evidenced in Vera Lutter’s use of the camera obscura and Adam Fuss’ photograms. Lutter inverts light and dark in the city, drawing shape and form in space with light, locating night in day. The city becomes a matrix of shapes and lines with light and shadow inverted. Fuss captures the specter of dust on a gray plain, the unconnected trails left by a snake traveling through talcum powder. He has written, “It’s only when I make a picture that I have to keep looking at that I feel I’ve succeeded. I’ve always needed to make images that have a sense of revelation to the viewer, namely me. It’s more like the sensation of looking into the face of someone very beautiful. Or perhaps, when … you’re faced with the unknown”. This would apply to all of the works in “Contradictions.”

Two artists are making their gallery debuts. Nathan Harger is a recent MFA graduate from Parsons The New School for Design. His assemblage of grids of cars are caught in motion and combine to recreate that sense of flow and time, and his urban cityscapes contrast the black of electrical wires and conduits against the white sky. Best known for his conceptual editorial work, Horacio Salinas debuted at the New York Photo Festival in June with these ironic considerations of the classic road trip, formal arrangements of bold light-filled, positive spaces invaded or corralled by gray-black truck tire treads.

John Cheever observed “Art is the triumph over chaos”. That is the contradiction, the real and unreal, order and chaos in black and white photographs.