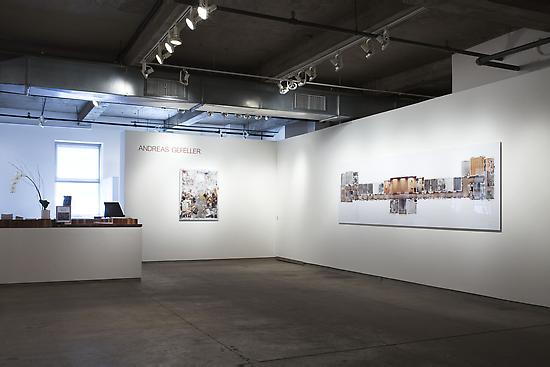 Hasted Hunt is pleased to announce new work by Andreas Gefeller, large color photographs from his ongoing series “Supervisions.” The exhibition runs from March 5 to April 25, 2009. There will be a reception for the artist on Thursday, March 5th from 6 to 8 PM.

Gefeller offers an intensely detailed view of the world that is unique. The viewer knows what he is seeing but senses that it is not actually possible. This is a low flying “bird’s eye” view. The artist methodically maps an area photographically. The work is representational, a sort of topographic reportage, and yet, it seems disconcertingly unreal. Shooting over and over so close to the ground reveals a panorama of details with no perspective.

Gefeller’s most recent “Supervisions” reflect his heightened sensitivity to time, evidence and order. Each element of the finished image represents less than a fraction of a second exposure time as he steps off and photographs every square meter below. The element of time is noticeable, for example, in lengthening shadows (“Parking Site, Düsseldorf, 2007”) or tonal shifts (“Leaves, Düsseldorf, 2007”). And history, the recorded passage of time, lies in the residual celebratory detritus left on the ground after a World Cup soccer match in “Berlin, 07/09/2006” or in the paint on paint on paint of the Pollock or Basquiat-like New York roof, “Graffiti, New York, 2007”.

The artist finds the tension between whirling craziness and calm, the chaos of water as it ripples and shimmers playing over the orderly bold black graphic at the bottom of the “Swimming Pool, Düsseldorf, 2008”. Similarly the breaking foaming waves oppose the still, clear patches of sea in “Beach, Domburg, 2006”.

Consistently Gefeller moves the viewer to a new dimension, a previously unseen, even unknown world, itself gridded and squared off on the wall.

These works are like contemporary photographic tapestries. The artistry is in Gefeller’s “eye”; his uncanny ability to locate spaces which unfold so stunningly and his virtuosic technique. It is not the intention, but the works reference Modern painting. The above mentioned “Swimming Pool” has the graphic simplicity and grace of a hallucinatory Agnes Martin; “Sand Tracks” acts like an off-white Robert Ryman; and “CDG, Paris, 2006”, a tiled floor area at a set of air-locking doors at Charles de Gaulle Airport, echoes the minimalism of Mark Rothko. Similarly “Leaves” is an Op art swirling vortex of tiny shapes at the base of a ginkgo tree and “Parking Site 2, Tokyo, 2007” is a mad Bauhaus mix of blacktop, bushes and painted traffic lines.

Since his American debut in 2007, Gefeller has been included in a number of shows, such as “Chisel”, curated by Kathy Ryan at the New York Photography Festival, the debut exhibition at the Taubman Museum of Art in Roanoke, and “Human/Nature: Recent European Landscape Photography” at the Nelson-Atkins Museum in St. Louis. The Nelson-Atkins Museum as well as The National Gallery of Canada has acquired works by Gefeller for their permanent collections.

Internationally, the artist has had shows over the past two years in Cottbus, Berlin, Amsterdam, Hanover, Burgdorf and Düsseldorf. Gefeller’s third publication is scheduled to be released in early 2009.