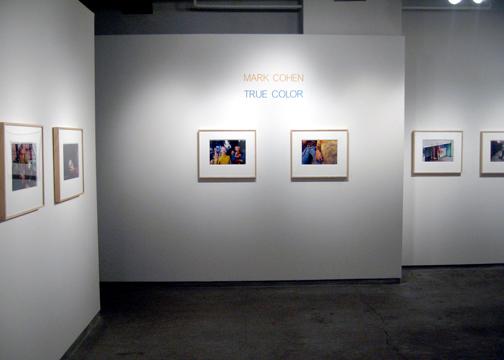 Mark Cohen is part of the generation of street photographers that includes Robert Frank, William Klein, and Lee Friedlander although Cohen photographed exclusively in and around his hometown Wilkes-Barre, Pennsylvania. This work is distinguished by Cohen’s distinctive close up style, with its graphic boldness, and by his seemingly deep regard for his neighbors and their children. The deeply saturated colors in this work have the feel of 1970’s yet seem contemporary.

Cohen finds odd and affecting suburban enigmas. His special view of kids, for example, shows in the shared conspiracies in “Boy in Yellow Shirt Smoking” and in the surreptitiousness of the onlooker in “Legs and Boy in Pool” with a small boy in a diving mask comically glimpsing at a woman. These are Wilkes-Barre kids caught playing and posing in photographs that feel like the best stills from home movies. Look at “Karate Stance” and “Girl with Bat and Ball”. Cohen also finds quirky drama in simple details like a bare hand clasped with “One Red Glove”, and “Small Hand by Yellow Shirt” captures a kind of rough and tumble camaraderie simply with planes of color and a child’s fingers.

True Color was originally commissioned by the George Eastman House, which has a large holding of the artist’s work. Cohen has had solo exhibitions at the Museum of Modern Art in New York, the Art Institute of Chicago, and the Corcoran Gallery of Art in Washington, D.C., and he has work in the collections of the Metropolitan Museum of Art, the Whitney Museum, the San Francisco MoMA, and the Fogg Museum, Cambridge, MA.
The prints in this exhibition are from a portfolio of thirty color dye transfers from the G&I Studio in Seattle, Washington. These are a collaboration between Cohen and the celebrated printers, Guy Stricherz and Irene Malli, who have also been responsible for the William Eggleston dye transfer prints since the late 1990’s .

PowerHouse published Mark Cohen True Color in book form in 2007, and Grim Street in 2005, a selection of Cohen’s black and white photography. Like the color work, those images are fiercely charged, the unique intensity due to the artist’s use of flash and his very tight cropping. Cohen has received fellowships from the Guggenheim Foundation (twice) and the National Endowment of the Arts. His work is featured in such classic books as The New Color Photography: American Photography since 1960 by Sally Eauclaire and Mirrors and Windows by John Szarkowski.

He was born in1943 and still lives in Wilkes-Barre, Pennsylvania.