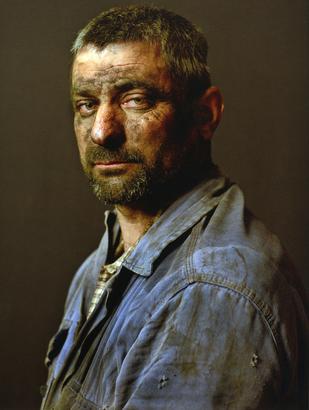 Hasted Kraeutler is pleased to announce Relatos, the first exhibition in the United States of the work of Pierre Gonnord, beginning December 8, 2011 and running through February 4, 2012.

Pierre Gonnord (born in France in 1963, lives in Spain) is widely celebrated for his portraits of marginal individuals, including Gypsies, punks and immigrants, as well as for his remarkable landscapes. His photographs speak to a long tradition of portraiture and representation in the history of art. The title of the exhibition, Relatos, was chosen by the artist and means “narrations”, “accounts” and “stories” in Spanish.

“I choose my contemporaries in the anonymity of the big cities because their faces, under the skin, narrate unique, remarkable stories about our era. Sometimes hostile, almost always fragile and very often wounded behind the opacity of their masks, they represent specific social realities and, sometimes, another concept of beauty.... Every day, in the photographic ritual, I am building, little by little, my self-portrait.” - Pierre Gonnord

Pierre Gonnord has had solo exhibitions at the Maison Européenne de la Photographie (Paris, France, 2005), Case Asia (Barcelona, 2006), the Museo de Bellas Artes de Sevilla (Seville, 2006), the Museo de Bellas Artes de Santander (Santander, 2007), the Centro de Fotografía Universidad de Salamanca (Salamanca, 2008). In 2011, Gonnord’s work was included in the exhibition, Real Venice, at the Abbey of San Giorgio Maggiore, Venice, as a part of the 54th Venice Biennale. Pierre Gonnord’s work is in many major public and private collections, including the collections of the Museo Nacional Centro de Arte “Reina Sofia” in Madrid, the Maison Européenne de la Photographie in Paris, the Centre National des Arts Plastiques in Paris, and the Museum of Contemporary Art in Chicago. The artist has had over ten books and catalogs published of his work.

This exhibition was made possible by the generous collaboration of Galería Juana de Aizpuru.