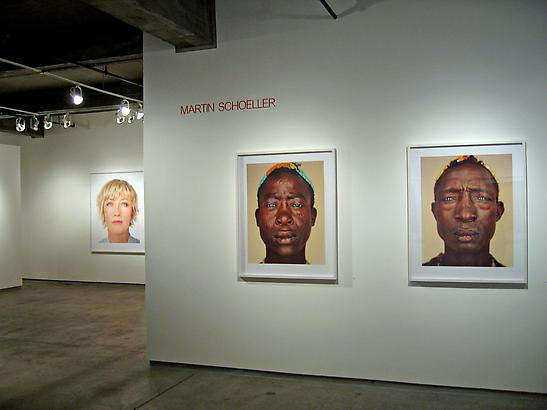 Hasted Hunt is pleased to announce MARTIN SCHOELLER – CLOSE UP, from May 25 through September 1, 2006.  The collection includes large format photographic portraits.  The exhibition is presented in conjunction with the publication of Martin Schoeller - Close Up: Portraits 1998-2005 (teNeues 2005).  This is Martin Schoeller's US debut.  There will be a reception on Thursday, May 25th from 6 to 8 PM.

Martin Schoeller’s unique and distinctive style of making portraits is characterized by its directness. The model, often a celebrity (Jack Nicholson, Angelina Jolie), political figure (Bill Clinton), or athlete (Lance Armstrong) faces the photographer squarely, and the image is cropped very tightly.  It is as if the already forceful essence and intensity of their personality has been further compressed.  This power is emphasized in the large format prints (printed up to 50 x 40 inches).

The most vital feature of Martin Schoeller’s work is the mesmerizing way in which the subjects transfix the viewer.  The eyes are full of life.  Schoeller's technique is a combination of his directorial skills and remarkable lighting.  The work has been sometimes characterized as raw and unforgiving, but it is, in fact, revealing and smart.

The influence of well-known German artists, his teachers Hilla and Bernd Becher, is evident in the rigor and systematic approach to the making of these portraits.  These typologies are made with a similar vision and precision to what the Bechers bring to their water towers and other series.

Martin Schoeller has been a contract photographer for The New Yorker since 1999.  The editor, David Remnick, says in his introduction to Close Up:

"Celebrity is all about surface and saturation, and “the big heads” of Martin Schoeller push those qualities to the limit.  They give the face, the human expression, a new dimension, and that’s why we keep looking at them.  That’s what portraits are for, what they are all about.  It is very hard not to look for a long time at these faces, known and unknown, celebrities and ordinary people."

American Photo named Martin Schoeller one of the “100 Most Important People in Photography” and in the last year alone, Schoeller has been profiled on television and in over 100 international publications ranging from Hello to The Economist to Photo District News.

A native of Germany, Martin Schoeller lives and works in New York City.

For more information or visuals contact the Hasted Hunt gallery at info@hastedhunt.com or 212 627-0006.

MARTIN SCHOELLER: READY FOR THEIR CLOSE UP
View More