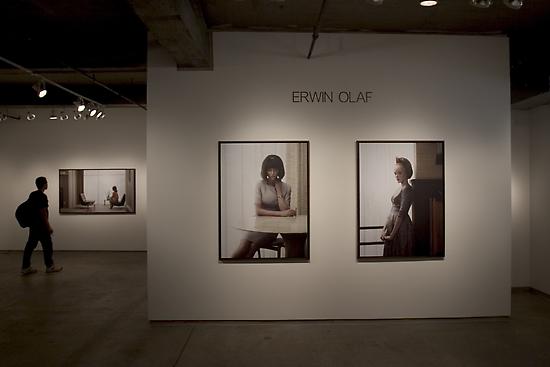 Hasted Hunt is pleased to announce new work by Dutch photographer and filmmaker, Erwin Olaf in an exhibition titled, Grief, from April 19th to June 2, 2007. This is Erwin Olaf’s second show with Hasted Hunt following his successful debut Rain and Hope.

Grief is the third and final installment of Erwin Olaf's trilogy. These are enigmatic narratives and portraits, mostly of women, caught in private moments. The décor, the hairstyles, the clothes, and the affect all reference the early 1960’s in the US. The color palette further underscores this.

Like Olaf's earlier work, these images are carefully staged in studio settings. This is not reportage. Grief is the last episode in the series following Rain and Hope which were called "mysterious and touching" by Ken Johnson writing for The New York Times.

The models in Olaf's series seem caught in intensely private moments of reflection or indecision. Up close it appears that some of them have been crying. The reason for these tears is never explicit. Similarly the colors are slightly drained. The images almost seem intended for a slick lifestyle editorial portfolio, but instead they are unexpectedly moody and haunting. The impact is unsettling.

Erwin Olaf has been influenced by the styles of the early years of the John F. Kennedy White House and inspired by the social change of the 60’s. A specific inspiration was a well-known 1961 Mark Shaw portrait of Jackie Kennedy. Although a small child in the 1960’s, Olaf has a powerful early memory of both Kennedys. Erwin Olaf is now struck by the seeming globalization of the world, the rise of feminism and the middle class, and in particular, the pervasive influence of TV. A video accompanies the exhibition.

In the past year Erwin Olaf has had solo shows in Antwerp, Utrecht, Prague, Brisbane, Milan, and New York, and been part of group shows from Montreal to Seoul, Beijing and Paris. Olaf is unique: funny, inventive, ironic, sensual, and often shocking. Olaf manages to combine his artistic and commercial careers simultaneously, bringing a contemporary imagination and technical ingenuity to a range of projects. In the past year, Erwin Olaf has created two surreal editorial portfolios for The New York Times Magazine that brought him to the attention of an American audience and a similarly startling Christmas fashion spread in the UK for The London Sunday Times.

Erwin Olaf lives and works in The Netherlands.

There will be a reception for the artist on Thursday, April 26th from 6 to 8 PM.

The exhibition Grief by Erwin Olaf is supported by the Consulate General of The Netherlands and the Mondriaan Foundation.

For visuals or more information contact the gallery at 212 627-0006 or info@hastedhunt.com.