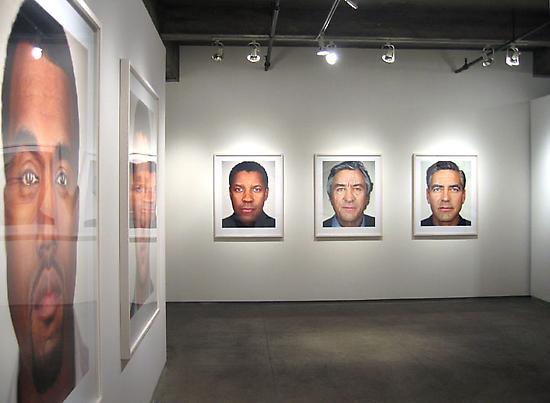 Hasted Hunt is pleased to announce Martin Schoeller – “New Work,” large format photographic portraits. There will be a reception for Martin Schoeller on Thursday, January 10th from 6 to 8 PM.

With “New Work,” Martin Schoeller has added to the series premiered in “Close Up,” Schoeller's Hasted Hunt debut in 2006 and book of the same title from Te Neues (2005). “New Work” will include color and black and white work which has not been exhibited on the east coast before, large tightly cropped faces ranging in personalities from celebrities, athletes, musicians and politicians to members of his family and non-famous individuals.

Schoeller intends to keep adding to this body of work in the next several years. Schoeller's distinctive style combines a strict methodology with an ability to get his subjects to actively collaborate with him fully energizing these portraits. New to the series are celebrities such as actors George Clooney, Denzel Washington, Russell Crowe, Robert DeNiro, Will Ferrell, Meryl Streep, Helen Mirren, Cate Blanchett and Judi Dench, as well as Henry Kissinger and Michael Jordan.

We will debut Schoeller's specially commissioned group of members from the Amazonian Pirahã tribe, striking, mysterious faces of the rarely photographed Pirahã people, an indigenous hunter-gatherer tribe that lives primarily on the banks of the Maici River in Brazil.  Currently numbered at approximately 360, the culture is in grave danger of extinction.  These photographs were specially commissioned by "The New Yorker."

"There is something magically gripping about how these beings who exist in our collective imagination like pagan gods are so vividly,  physically embodied, stripped of the protective veneer of publicity  yet untainted but the salaciousness of the paparazzi shot. ‘You can't help thinking that’s what Mickey Rourke (or Donald Rumsfeld or Cindy Sherman) really looks like’. Yet despite the remorselessly  clinical scrutiny, they retain their superhuman auras, which may  say as much about us as it does about them."

In the past two years, Schoeller’s work has been acquired and exhibited by the Smithsonian National Portrait Gallery in Washington DC, and he has had exhibitions in Boston, Los Angeles, Amsterdam, Milan and Berlin. Schoeller continues to work as a contract photographer for "The New Yorker" and plans to exhibit his series on female body builders in 2008.

For more information or visuals contact the gallery at info@hastedhunt.com or 212 627-0006.